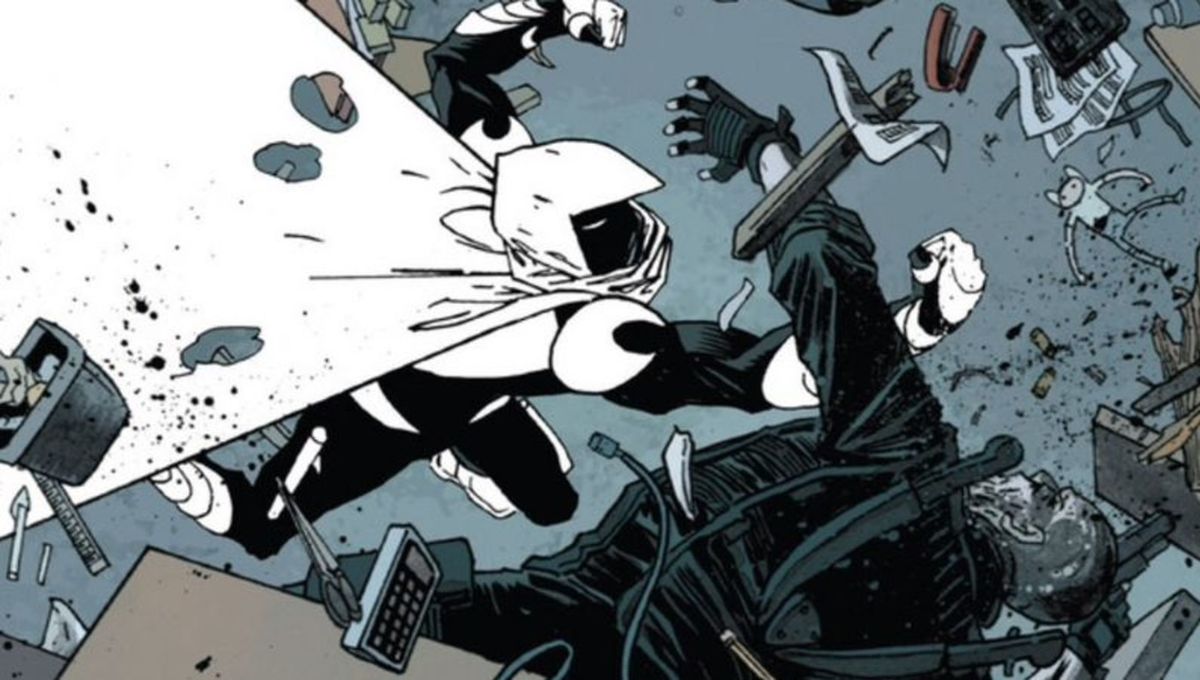 At the D23 Expo back in August, Marvel Studios President Kevin Feige announced three new series set in the Marvel Cinematic Universe coming to the Disney+ streaming service. Among them was Moon Knight, a series based on the Marvel Comics hero of the same name. For some MCU fans, this was an answer to a long-ago prayer, an overdue step up for a street-level hero who could have found a place back in Marvel’s little Netflix Defenders-verse if he’d just been given the chance. For others, the response to Moon Knight was either one of slighty befuddled intrigue or simply a resounding “Huh?”

I’m a Moon Knight fan, so I’m not here to pick on the guy, but I also wasn’t exactly surprised when I mentioned to friends of mine — friends who devour the MCU and even friends who’ve dug into more than a few comics because of it — that Moon Knight was getting his own show and they responded with either vague awareness or no awareness at all. Moon Knight first appeared in Marvel Comics nearly 45 years ago, and while he’s always maintained a presence since then, he’s never quite been a star. He’s never seen the kind of ascension to the forefront of the comic book world that heroes like Daredevil did, never had the luxury of an ongoing series that’s going to keep relaunching and rebooting come what may, and until now never had the kind of exposure that would make people who aren’t comics devotees really eager to seek him out.

There are a lot of reasons for this, but one of them is that Moon Knight… well, he’s weird. He’s a vigilante who got his calling to superheroics via resurrection by an Egyptian moon deity. When he started doing the super-thing he developed not one but several secret identities which would later be explained as multiple personalities. His superpowers are dependent upon the phases of the moon, though recently he seems to have lost them entirely. He’s a billionaire with a ton of gadgets who chooses to wear all-white in the middle of the night because he’s crazy, and at various times he’s done everything from take on a sidekick to produce a TV show based on his superheroics to drive a cab so he knows what life is like on the streets. Comics, y’all. They’re wild.

The point is that Moon Knight is a lot, and if you’ve gone this long with only a passing understanding that a guy named “Moon Knight” even exists, you might be on the hunt for an entry-level story about him that will both explain who and what he is and also convince you that he’s worth hours of your time both on the page and in a streaming series. So, where should you start? Thankfully, despite Moon Knight’s many complexities, there is a simple answer:

Though he’s since migrated over to DC for work like The Wild Storm, Ellis spent much of the 2010s popping into Marvel Comics to re-energize various characters and properties, including a brief but invigorating run on Secret Avengers and his excellent Karnak miniseries. In between those two efforts came his attempt to launch a new volume of Moon Knight in a way that was both accessible to new readers and celebratory in terms of Moon Knight’s general strangeness. The result is a comic that embraces both simplicity and continuity, and it all begins with the introduction adorning the title page of each of the issues:

“Mercenary Marc Spector died in Egypt, under a statue of the ancient deity Khonshu. He returned to life in the shadow of the moon god, and wore his aspect to fight crime for his own redemption. He went completely insane, and disappeared.

“This is what happened next.”

Are there other, fruitful complexities to Moon Knight’s whole Thing? Yes, there are. Do you need more than that to get started? No, you do not.

From there, Ellis introduces us to the two personas currently dominating Moon Knight’s superheroic life. There’s Moon Knight, the guy who glides around the city with a cape and body armor, and then there’s Mr. Knight, who wears an all-white suit and consults with the NYPD on New York’s strangest cases. That’s where things begin, with Mr. Knight following the trail of a very specific kind of serial killer, and from there you’re off and running with six self-contained, action-packed issues that both illuminate some of the subtle oddities of Moon Knight’s life and never overwhelm the reader with too much capital-C Continuity.

Thanks to Shalvey’s propulsive, gritty-yet-elegant art and Bellaire’s precise, often minimalist colors, these issues of Moon Knight attain the edge-of-your-seat sense of kinetic power that many action-heavy comics can only dream about, in large part because Ellis knows when to slow the story down and deliver chunks of dialogue and when to just get out of the way and let his art team soar. We learn so much about Marc Spector — why he likes to wear all white, why he enters through the front door instead of sneaking past his enemies, and even a little bit of why his mind seems to often be at war with itself — just from the choices he makes in the moment, the battles he chooses and the cases he dives into. The past is there — one of the most striking images in the series is the way Spector sees Khonshu in his own mind — but it never overwhelms the moment and the action. It’s a seasoning, not the main ingredient.

That’s part of what makes this series so perfect for Moon Knight newcomers. If you just want to see a guy in a cool costume fight some bad guys for six rapid-fire issues, you’re going to get it. If you want to dig deeper, there are numerous threads running just beneath that action that entice you to go and seek out more stories about the weird guy in the white hood. You could just keep going and read the rest of Volume 5’s 17 issues. You could check out Jeff Lemire’s work in Volume 6 or Brian Michael Bendis’ run on Volume 4. You could even dig all the way back to the original Moon Knight solo series from Doug Moench and Bill Sienkiewicz, to see how it all began and why it got so complicated. Along the way you’ll discover more about how Khonshu works, dig into Spector’s Jewish heritage, find out more about his rogues gallery and struggles with mental illness, and much more.

Or, you could just read these six issues and stop. If you do that you’ll still get to read the story in which Moon Knight fights through five floors of armed thugs all by himself, and that alone is worth the peek into Marc Spector’s odd world.

10 Dark King of the Hill Theories That Change Everything