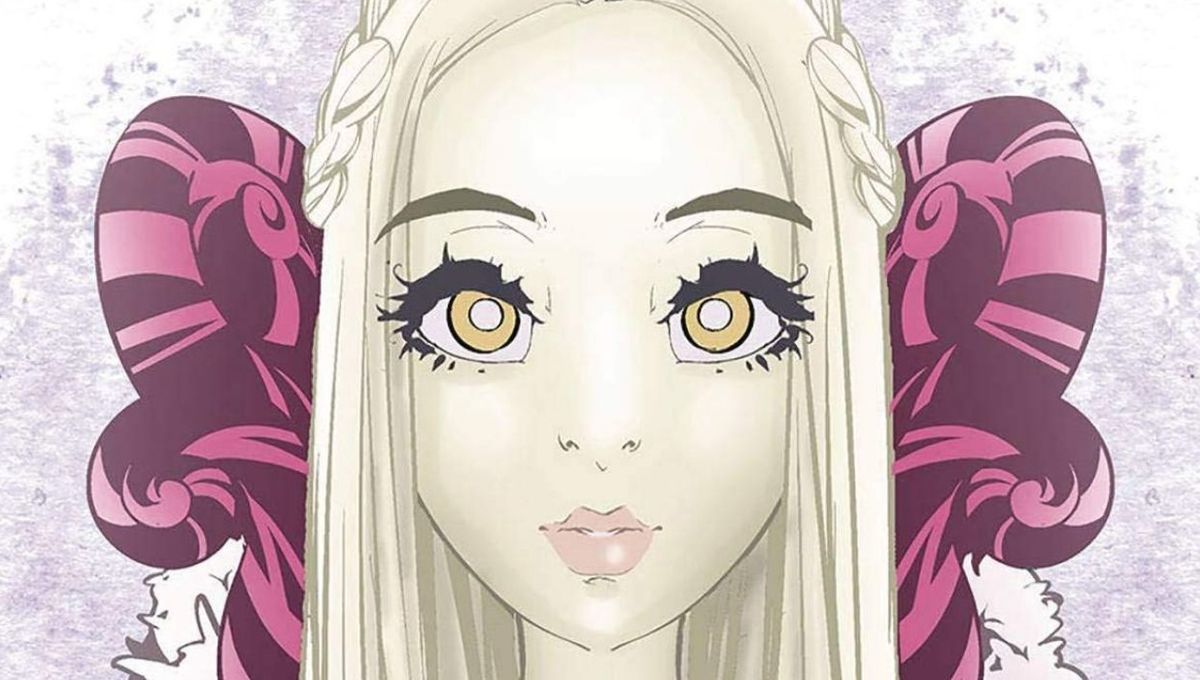 The wildly popular internet musician Poppy is all at once a performance artist, a ubiquitous pop star, a fashionista, and a mysterious entity. Racking up millions of YouTube followers, she’s been called everything from a genius artist to a cult leader secretly working for the Illuminati.

Heavily influenced by Japanese kawaii (“cute”) culture, Poppy never goes by her birth name (Moriah Rose Pereira). She also never talks about where she’s from and never comes out of character (even for this interview). Legions of fans known as #poppyseeds spend countless hours theorizing over the singer’s true origins. Poppy will only divulge that she was created and lives on the internet.

Described as Poppy’s true origins, the story is a techno-horror fantasy about an entertainment android who learns about the outside world by diving the internet. Eventually, she connects with a fan in the “Church of Poppy” and manages to upgrade herself, gaining sentience in the process. Ultimately, the story is about freedom from corporate control and making human connections in the real world.

Poppy’s transmedia brand is on full display here as she mixes her iconic music videos with unique unexplained content. She once interviewed a plant (she has a plant bestie in the story as well) and she sometimes talks to a mannequin named Charlotte (who appears as an untrustworthy human character in the book).

SYFY WIRE spoke with Poppy about Genesis One, her accompanying album I C U: Music to Read To, and ironically, why she thinks everyone needs to log off the internet.

Genesis One is about your origin story, but there are several versions of you revealed. Which version are you now?

Yes. It’s about Poppy and how she came to be. I am Poppy Version X.

Do you have a favorite comic book or series?

Yes, Titanic and I like comic books. Akira is one that we really like, but I do read a little bit of Japanese manga sometimes and I’ve been studying Japanese for many years. I just really love the art and I think [you see that influence] in Genesis One. I was able to work with beautiful artists, including Masa Minoura, who is a Japanese illustrator and animator.

You work with Titanic Sinclair often, what was it like collaborating with so many new people?

It was so fun. Because Titantic and I usually work in the medium of videos and music, we’ve never collaborated with anybody before. Especially in this medium. So we knew we needed to choose the best people. And I think we did.

You were able to incorporate themes from your music videos that we’ve heard before into the comic, correct?

Right. So there’s a part about Low Life, in the middle we touch on Time is Up and at the connect the end. We touch upon X

There’s also music that accompanies this story. Can you tell us about what inspired that?

Oh, I guess trying to build a beautiful sonic landscape that the reader can enjoy while they’re reading Genesis One. We decided to compose an Ambient album called I C U: Music to Read To. That is my second ambient album, my other one is called 3:36 (Music to Sleep To). I think I C U does a really great job taking the reader on a journey.

Let’s talk about the characters a bit. Skeleton thinks he’s protecting Poppy, is he her friend?

I would say that Skeleton and I have never wholly eye to eye, but I think he had Poppy’s best interests in mind. I can’t trust him.

Can she trust, Charlotte?

Now there are some parts of the narrative get kind of violent. Was that difficult for you to tell that part of your story?

No, I just think, in the music industry, there are a lot of things that go on behind closed doors that are really scary and sometimes violent. I felt that it was important to include in the book. My new album will elaborate on the story a little bit more.

Your art, music, video and now this graphic novel all transport the reader to other worlds and realities. Can you talk about what inspires you?

Art should help people escape and I believe that the human or being or celebrity or whoever shouldn’t remind everybody constantly about all of the troubles in the outside world. We should make something positive and zero in on the message and communicate it through art as opposed to a Twitter profile.

How would you change that?

Turn it off. I think a lot of art has become less interesting and people have become less creative because of the Internet. I think people should focus more on a positive output that adds to the world as opposed to a negative opinion which just falls into the abyss of the internet. You are absorbing so much information that you can’t totally make sense of. I think people should practice meditation and practice, maybe, isolating themselves from the internet a little bit and reassessing what they do want in their lives

The other side of that coin is that is if we turn off the internet, we can’t see you either.

Yes, but you can do what you need to do [on the internet] in a shorter amount of time and then log off.

What do you say to new fans that might not know your work?

Well, first I’d say welcome, would you like to be transported to another dimension? You should read Genesis One. It is a really cute, action-packed, horror-fun book. And this is just the beginning.

Stan Lee’s co-creators on Alliances: A Trick of Light hope to turn listeners into Ditkos and Kirbys