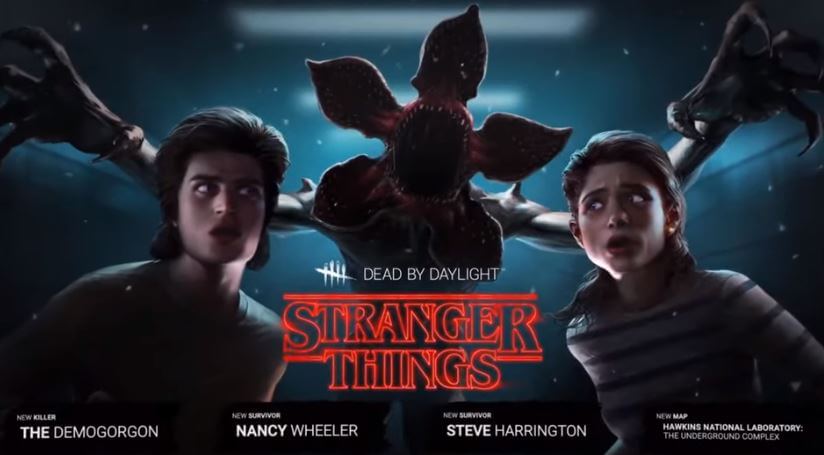 Dead by Daylight is a horror game that keeps on giving.

Since its initial release in June 2016 on PC, the game has gone from strength to strength – expanding its initial roster of 3 killers (Trapper, Wraith & Hillbilly) and 4 survivors (Dwight, Meg, Claudette & Jake) to a now impressive 16 killers and 17 survivors with a mixture of original characters and some huge horror favourite licensed characters such as Michael Myers, Freddie Kreuger and, most recently, Ghost Face.

Now, over three years since it first terrorised players in 2016, developers Behaviour Interactive have unveiled their next licensed franchise that will be crossing over with game next month – Netflix’s hugely popular show and Starburst favourite; Stranger Things! (After Netflix posted three images a few days ago hinting at the crossover)

Hitting the roster in September will be a brand new killer; The Demogorgon, and TWO, yes two, new survivors in Steve Harrington and Nancy Wheeler (with series regulars Joe Keery and Natalia Dyer lending their likeness to the characters in the game) along with a new map to explore – Hawkins National Laboratory.

Fans of the game have some truly unique confrontations to look forward to as we will now be able to see Steve go head-to-head with Amanda (aka Pig Face) from SAW, Nancy play the Final Girl role against Leatherface and Laurie Strode tackle the Demogorgon.

Are you a player of Dead by Daylight? Or has this news piqued your interest in picking up the game? What franchises would you like to see join the game? Let us know…

Indie Comics Spotlight: Teachings from Genesis One and the Church of Poppy

Why Is Epic Games Store Getting Exclusive New PC Games When Steam Is Arguably Better?