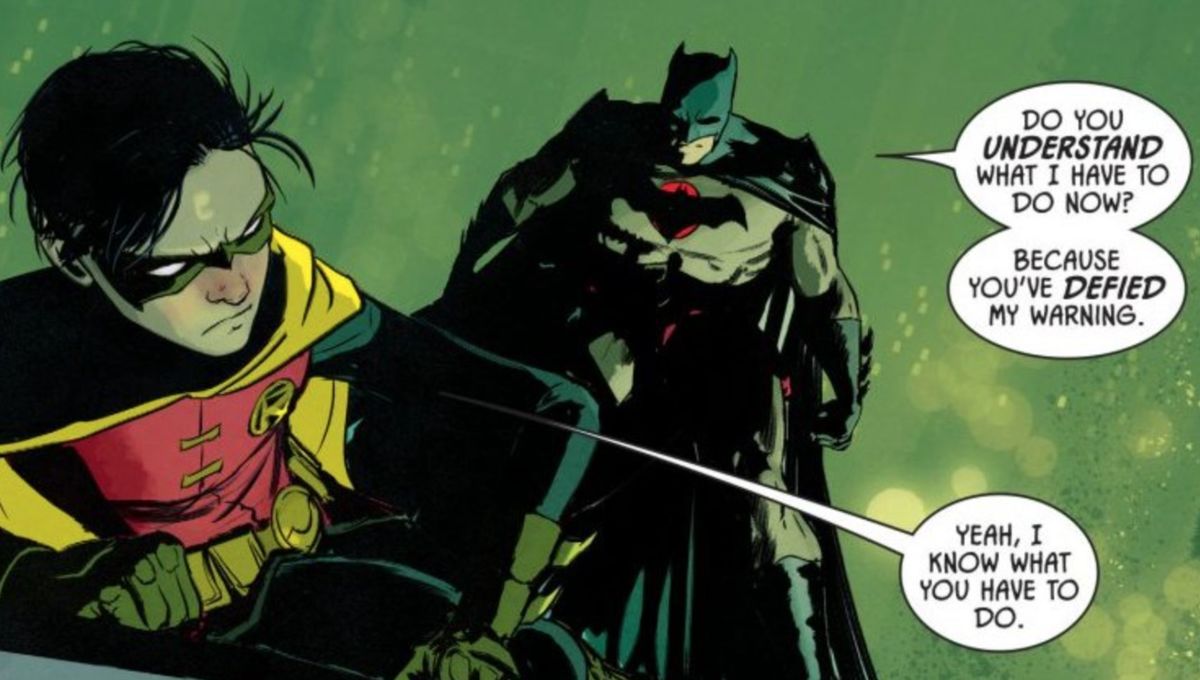 To say that Bruce Wayne has been having a tough time in the comics lately would be an understatement. Good ol’ Bats has been in a downward spiral ever since the now-notorious “wedding” issue, and things have … devolved. Tom King’s run continues in Batman #77 from DC Comics, which is Part 3 of the “City of Bane” arc.

The issue is written by King, with art by Mikel Janín, Tony S. Daniel, Norm Rapmund, Jordie Bellaire, and Tomeu Morey. Things aren’t just bad for Batman at the moment, they’re pretty horrible for Gotham City as a whole. Batman isn’t even in Gotham at the moment, because after being psychologically and physically beaten in every way imaginable, he was quite literally thrown out.

*WARNING: Major spoilers lie ahead for Batman #77, as well as “City of Bane” as a whole. If you are not caught up and do not want to be spoiled, then shoot that grapple and vanish from this article, bat-style.*

We weren’t entirely accurate before — there is still a Batman in Gotham, but it is not Bruce Wayne. It is the Thomas Wayne version of Batman from the alternate Flashpoint reality (thanks Barry), and he has helped Bane to utterly conquer the city. Flashpoint-Batman patrols the city at night with the super-powered (and unhinged) Gotham Girl, while the GCPD is run by villains like Riddler and Scarecrow. Authorities outside of the city have struck a deal with Bane, so as long as he keeps crime under control, no one gets in, and no one gets out.

Crime is kind of under control, because the criminals are running everything and civilians don’t want to get murdered. Superheroes are not allowed inside as part of the deal, and a very dastardly plot keeps out any and all members of the extended (and exiled) Bat-family.

Bane has Alfred Pennyworth chained up in Wayne Manor, and if any other members of Batman’s entourage even think about sneaking into the city limits, Alfred will be killed. This threat keeps Nightwing, Batwoman, and the rest of them out of the city, no question — but it doesn’t keep out Damian Wayne.

The son of Bruce and Talia al Ghul (also the latest Robin) sneaks in anyway. He handles Gotham Girl, takes out Scarecrow and Victor Zsasz, and scamps around the city ignoring threats put to him by Thomas. He tries to take on Thomas himself, and that’s where his cockiness ends. Thomas kicks Robin’s red-bottomed belly, and makes him a prisoner in Wayne Manor.

Damian knew full well what the price of his entrance into the city was, as did readers. We didn’t think that King and company would actually make good on that threat, but we guess that we forgot what kind of book this was.

Making sure that the captive Damian Wayne is watching, Bane snaps the neck of Alfred Pennyworth.

The most loyal friend that Bruce Wayne has ever had … is dead. He just got his own prequel TV series, too! Thomas and Bane don’t even care that they’ve lost their bargaining chip, because they now have Damian as a hostage. Really great work all around, Damian Wayne. Really good stuff.

Though all hope may seem lost, there are two important things to consider. For one, Selina Kyle has found Bruce and nursed him back to health, and the two of them are on their way back to Gotham, riding dark clouds of furious anger. When they find out about this? Vengeance is the night.

The second thing? This is the world of DC Comics, and main characters come and go all the time. The Alfred that had his neck snapped (they show it full-on, so no doubts there), could have been Clayface, another kind of double, or there could be a hidden Lazarus Pit somewhere close, who knows. Or they could just reboot the whole world and start over. So we doubt that this was the last ride for Alfred.

All of that said … it still hurts. It hurts bad, that’s exactly what Bane (and probably King) intended. Thanks again, Damian!

Batman #77 is on shelves right now, courtesy of DC Comics.