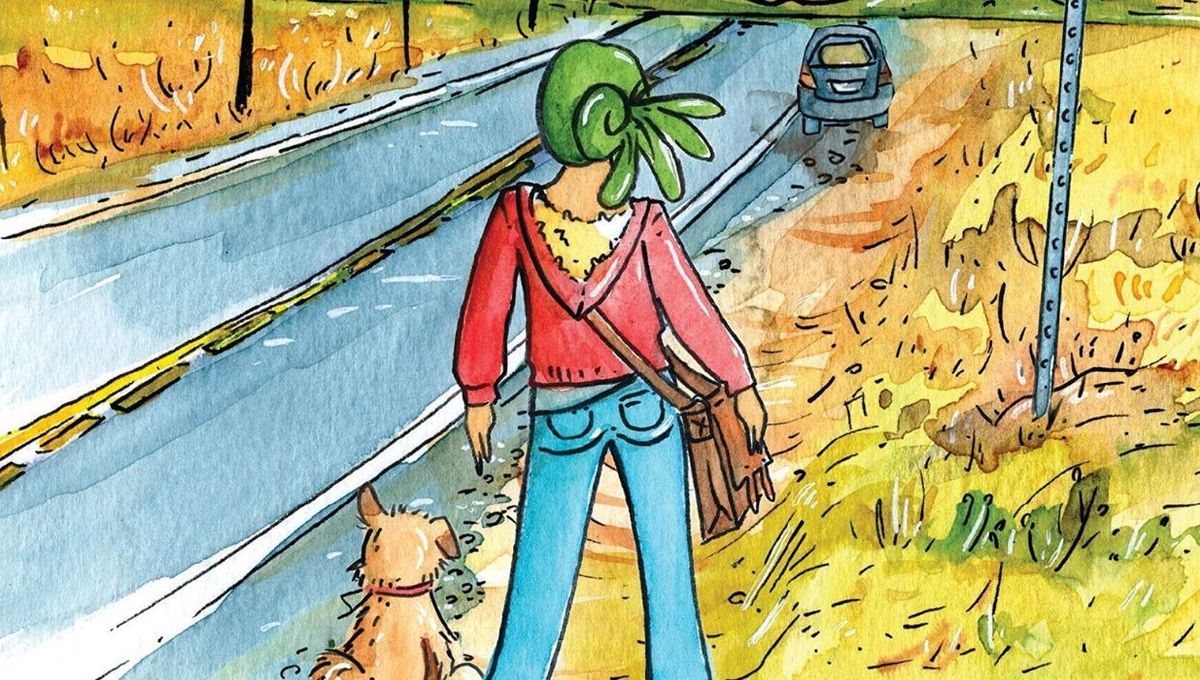 Shing Yin Khor (also known as Sawdust Bear) is not a comic book creator. Sure, they did win an Ignatz Award for their comic strip Say it With Noodles: On Learning to Speak the Language of Food in 2018, Khor identifies more as a writer and artist who express themselves through various mediums — including sculpture, experimental art, photography and yes, sequential art as well. For Khor, every project is a memoir and every experience a chapter.

Khor is Malaysian-Chinese but grew up in the Philippines, where their image of America was a melange of the American TV shows that reached their village and the characters in their favorite books like The Grapes of Wrath and Little House on the Prairie.

At the age of 16, their family immigrated to the U.S., and Khor immediately realized that the images and culture exported ignored the voices and cultures of so many people here.

People who are also Americans.

In 2016, ten years after moving to California and four years after becoming a naturalized citizen, Khor decided to act on their fascination with the American West and drive the length of Route 66. The historic stretch of asphalt that reaches from California to Chicago and was once considered “America’s Main Street.” What developed from that experience was the graphic novel The American Dream?: A Journey on Route 66 Discovering Dinosaur Statues, Muffler Men, and the Perfect Breakfast Burrito (Zest Books). But what Shing Yin Khor learned about this country and themselves, was priceless.

SYFY WIRE talked with Khor about the purpose behind their books, the massive undertaking of this autobiographical story, and why Dinosaur Statues and the American West are so fascinating to them.

Malaysia has one cartoonist who is incredibly well known. His name is Lat. He’s incredibly well known for this memoir called The Kampung Boy. It’s about life growing up in Malaysia in a kampung, which is a term for a rural town. Everyone in Malaysia has a copy. It’s a national treasure. That was the first comic I ever saw and defined my understanding of what comics were.

The way television worked in Malaysia and the Philippines was a bit different. Everything was, like, a little bit delayed. But some things we saw exactly the same time as America did, like Robotech and Teenage Mutant Ninja Turtles and stuff. but it didn’t interest me as much as the stories about Americana.

You’ve mentioned that both The Grapes of Wrath and Little House on the Prairie were some of your favorite books as a child. What drew you to those stories?

I always had this fascination with western stories. Specifically, 19th-century American stories, which objectively thinking about it now doesn’t make that much sense. The life of a Malaysian teenager living in the Philippines is so different from a bunch of cannery workers, or a family forging a new life in the West. But to me, it all felt like fantasy stories.

What was your reaction to America when you first came here? Did it live up to your expectations?

I had this very idealized sense of the American West. I first moved to the Bay Area to a predominantly Asian part of town with my family. There was sort of this realization that America is not as white as what I saw on television. That was a relief but I also felt lied to by the media. Why wasn’t I seeing any of this reflected in what I was watching and reading? The biggest eye-opener for me, is the recognition that black and brown people have always been in this country and they built this country and [are a part of] the American mythos. But so many stories I read skipped over them. A good amount of my work nowadays is about acknowledging the presence of people that built this country and are still making this country today.

You’re a very talented artist who works across many mediums. What drew you to sequential art? Or is it just another form of expression for you?

It’s a form of expression that feels incredibly natural to me. I write and I’m an illustrator and that specific combination of visual art and words just makes a lot of sense to me. In a sense, this kind of form of visual storytelling feels like the most direct translation of the way my brain works.

The title of your book is a question. Were you asking yourself what it means to be American as you traveled and as you wrote the book?

So much of this journey was about me trying to figure out what being an immigrant meant. To explore America outside of the cities that I’ve always lived in and explore how it would change my understanding of America or my relationship to it. I set out on the trip with basically a simple question and to be perfectly honest; I finished the trip not necessarily finding an answer. And I think that’s okay. I believe that the American dream as a concept is this continually evolving amorphous thing. The only constant is this sense of searching for the idea reflected through centuries of literature.

What was a real moment for you on this journey that was difficult to translate onto the page?

It’s the New Mexico section. I came across this abandoned motel that had this “American Owned” sign on it. I just had this immediate [visceral] reaction to it. I was so angry because I couldn’t explain it. It was clearly meant to be racist and xenophobic but the words themselves, “American Owned” alone [were innocuous]. I knew it was a dog whistle meant to say that the motel is run by white people only. But it opened up a whole other story about the history of Southeast Asian Motel ownership on Route 66. As I did more research, it was inspiring to see how the road has evolved.

Indian Americans are less than 2 percent of the United States population, but they own about 50 percent of motels in America. So years ago, these “American Owned” signs were put up by white motel owners as a signifier that their, motels were white run. But these days some of the South Asian-American motel owners are also putting these signs up because they are Americans too.

It’s been this really charming reclamation which is very inspiring, but in that moment where I first saw the sign, I spent the entire day silently fuming.

So I have to ask, what are the dinosaur statues?

The largest concentration of them is in Holbrook, Arizona. It’s closest to the Petrified Forest National Park which is known for a few real dinosaur fossils. Years ago, about 10 miles off from Holbrook there was a tourist trap called the “International Petrified Forest and Painted Desert” that created all of these statues. I guess they were trying to capitalize on people coming out there to the park. When it went bankrupt, all of these dinosaur statues were relocated to the general areas of Holbrook. Since then more statues were just created by people there. And it’s kept the place alive.

What is one of the most inspiring things about Route 66?

This road is alive in the same way that America is and it’s constantly changing. My experience will not be the same as everyone else’s. And that’s a good thing. Today it’s different. I made this trip in 2016 and so much has changed.

Back then, I was secure in my identity as an immigrant, and I am always going to be. But, I didn’t find my citizenship tenuous the way I do now. I drove through a bunch of towns that were conservative, but they were welcoming and now I would not recommend this trip to everyone. In a sense, it is a reflection of what America is today.

So it’s almost like you froze a moment in time in your book.

Yeah. I kind of did.

What are you working on next?

My next book is called The Legend of Auntie Po. Um, I’m working on it for Kokila, an imprint of Penguin/Random House. It’s a book about a logging camp in the Sierra Nevadas, where a 12-year-old Chinese camp cook tells stories about Paul Bunyan. You know, the giant lumberjack? But reinvented as an elderly Chinese Auntie. And [instead of a blue ox] she’s got this giant blue water buffalo. It’s very much a book about finding your identity and power as a child. And about who gets to own the American mythos.

DVD/Digital Review: ‘Power Of Grayskull: The Definitive History Of He-Man And The Masters Of The Universe’ Dives Deep To Explore One Of The Most Successful Franchises Of All Time

Harry Potter: 10 Reasons Slytherin Is The Best House (And 10 Why Gryffindor Is)