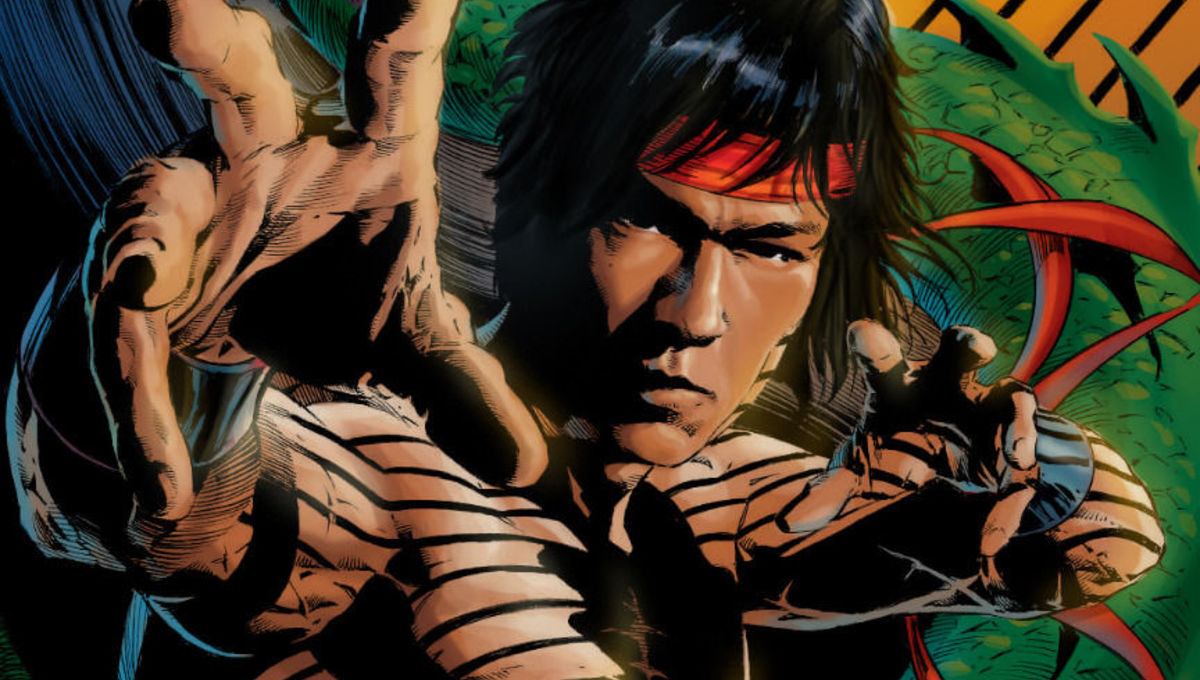 Phase 4 of the Marvel Cinematic Universe is officially underway, with a new slate of movies announced this weekend at SDCC, including the long-rumored Shang-Chi and the Legend of the 10 Rings, Eternals, Thor: Love and Thunder, and Doctor Strange in the Multiverse of Madness.

While we’re obviously excited about learning what happens to Thor and Doctor Strange in the next phase of the MCU, Shang-Chi (and the Eternals) presents Kevin Feige and Marvel Studios with an opportunity to expand the MCU in ways we haven’t seen prior, both casting-wise and in terms of scale and depth.

Created by writer Steve Englehart and artist Jim Starlin in the pages of Special Marvel Edition in 1973, Shang-Chi was originally meant to be Marvel’s version of the 1970s show Kung Fu. See, in the early ’70s, Marvel tried to secure adaptation rights to the popular TV show but was denied by DC Comics parent Warner Bros., which owned the program. Instead, Marvel optioned Sax Rohmer’s pulp series “Dr. Fu Manchu,” which was created in the early 1910s and follows the evil eponymous Chinese assassin Dr. Fu Manchu.

In Special Marvel Edition #15, Shang-Chi is introduced as a fearsome warrior, a living weapon and the cursed son of Fu Manchu. Early on, Shang-Chi is sent by his father to murder “a very evil man” but soon learns it’s actually his father who is the villain. After confronting his American mother in London, Shang-Chi vows to right Fu Manchu’s wrongs, eventually joining MI-6. Most of the early stories in Master of Kung Fu track Shang-Chi as he teams up with original Rohmer characters, including Sir Denis Nayland Smith, and new characters such as MI-6 agents Clive Reston and Leiko Wu.

Marvel’s bet on Shang-Chi was right on, as kung fu fever had struck America by 1974. In addition to the Master of Kung Fu taking off, Marvel’s oversized The Deadly Hands of Kung Fu magazine was also a breakout hit.

At this time, Sons of the Tiger, a book co-headlined by Shang-Chi and Iron Fist, was an immediate draw, with art by George Pérez, Jim Starlin, and Paul Gulacy and painted covers by the likes of Neal Adams. Each issue featured not just the comic-art adventures of Marvel’s greatest kung fu heroes, but extensive interviews, martial arts guides, photo features, and movie, TV, and book reviews.

After two issues of Shang-Chi headlining Special Marvel Edition, the comic book was renamed Master of Kung Fu and ran for more than 100 issues. Shortly after the switch, Englehart and Starlin departed the project and were replaced by writer Doug Moench and artist Paul Gulacy on Issue #22. Gulacy was eventually replaced by artist Jim Craig, who was succeeded by Mike Zeck.

As a master of hand-to-hand combat, Shang Chi’s power stems from his ability to learn any fighting style as well as control the life force, chi. Able to dodge bullets, deflect gunshots, and dodge deadly weapons ranging from swords to shuriken, Shang-Chi can throw down with the best of them. Previously in Marvel’s comic books, he has taught the likes of Spider-Man, Wolverine, Captain America, and, more recently, Domino.

On Saturday, Marvel announced that actor Simu Liu would take on the role of kung fu master Shang-Chi, with Tony Leung assuming the role of the villainous Mandarin. Not much is known about the plot of Shang-Chi, but there are already well-established connections to the Mandarin’s 10 Rings within the MCU. Of course, the Mandarin and the 10 Rings played a major role in Iron Man 3, eventually turning out to be a front organization for Aldrich Killian, actor Trevor Slattery, and A.I.M.

But Marvel reset the table for the villain’s return all the way back in 2014 with the one-shot short film “All Hail the King.” In the lengthy video (included in the extras of the Thor: The Dark World Blu-ray), former Mandarin frontman Trevor Slattery (Ben Kingsley) is navigating prison life and preparing for an interview with a TV reporter. In the end, the Mandarin’s reach is apparent as the reporter turns out to be a disciple of the 10 Rings who’s there to exact revenge for slandering the villain’s name.

“The Mandarin is a Warrior King who inspired generations of men through the Middle Ages, perhaps even further back in time,” the assassin says. “There’s someone who wants to meet you. The Mandarin has come back for his name.”

Mining the history of the Mandarin could prove fruitful and provide new connections to different parts of the MCU, including A.I.M. and the 10 Rings. The Chinese villain the Mandarin is actually one of Marvel’s oldest bad guys, having been created in the pages of Tales of Suspense #50 by Stan Lee and Don Heck. Mainly considered to be an Iron Man villain, the Mandarin made his debut fighting Tony Stark with “magical” rings recovered from a crashed spaceship. Bent on world domination, the Mandarin often presented a challenge for Iron Man, as he was also a bit of a tech geek and trying to shape the world.

There are several comics to read if you’re looking to learn more about the Mandarin and especially the history of the 10 Rings. Rumored to have ties to the race of dragons Fin Fang Foom is a part of, the 10 Rings are a major aspect of the Mandarin’s character. Aside from his origin story in Tales of Suspense #62, John Byrne and Paul Ryan took a look at his history in Iron Man: The Dragon Seed Saga. In this six-issue arc, readers find out more about the rings’ connection to an alien race of dragons, the Mandarin’s past, and how they all tie together.

While the 1970s series Master of Kung Fu provides a good start for Marvel fans looking to get to know Shang-Chi, a lot of his best stories have actually premiered in the past 20 years. With supporting roles fighting alongside Daredevil, Spider-Man, and the Avengers, Shang-Chi has become more entwined in the Marvel Universe over the last few years, emerging as one of its best heroic fighters.

In this updated MAX version, Shang-Chi, still a member of MI-6, must defeat a shadowy villain who has brainwashed a league of assassins. Moench’s take on Shang-Chi is modern and comes with a dash of James Bond. It’s a race against time as Shang-Chi must play detective as well as hunt down an ancient weapon that could destroy the world.

Shang-Chi features prominently in this awesome Amazing Spider-Man tale and also holds down his own mini-series, Spider-Island: Deadly Hands of Kung Fu. From the start of Dan Slott’s 2011 story, we see that Peter Parker (struggling to keep up with enemies like Venom) has turned to the best fighter he knows for advice. Aside from dispensing combat tips and sparring, Shang plays a pivotal role in saving New York City when the Jackal gives everyone spider-powers.

Launched in 2010, Secret Avengers follows a black-ops team of Avengers specially tasked with taking down the mysterious Shadow Council. Later in Brubaker’s run, a rogue group of S.H.I.E.L.D. agents resurrects a zombified version of the villainous Fu Manchu, only to discover that the name is only an alias. In reality, Shang-Chi’s father is really an ancient sorcerer who has gained immortality.

A few years later, in 2013, Jonathan Hickman and Mike Deodato gave the character an updated look and spy story to play with in Avengers #11. This is considered to be a standout Shang-Chi tale. Hickman even revisited the character in Avengers World #3, depicting the martial arts legend battling the Hand alongside heroes such as Wolverine, Black Widow, and Falcon.

In Gail Simone’s recent Domino run, the part-time hero turns to Shang-Chi for training as she tries to defeat the wily Topaz. After getting to know each other a bit better, the pair are attacked by several old foes, including Midnight, one of Shang-Chi’s first opponents. Things get tense when Domino’s lust for revenge pushes Shang-Chi to the brink.

Back in the mid-’90s, Journey Into Mystery had been canceled and revived as a book featuring the Lost Gods. At the height of the comic book boom in 1996, Marvel released a new version of the Chinese hero by Ben Raab and Brian Hagen in Journey Into Mystery #514. In this book, Shang-Chi was depicted as an unassuming fisherman in China, quietly navigating the dark underbelly of Hong Kong.

Greg Pak created the Protectors, a gathering of Amadeus Cho, Silk, Ms. Marvel, Jimmy Woo, and several other Asian-American superheroes, in the pages of Totally Awesome Hulk in 2016. In that issue, Shang-Chi led the group against a hostile alien race that crashes a fundraiser and night out in Koreatown.

Cable Was Originally in X-Men: Days of Future Past