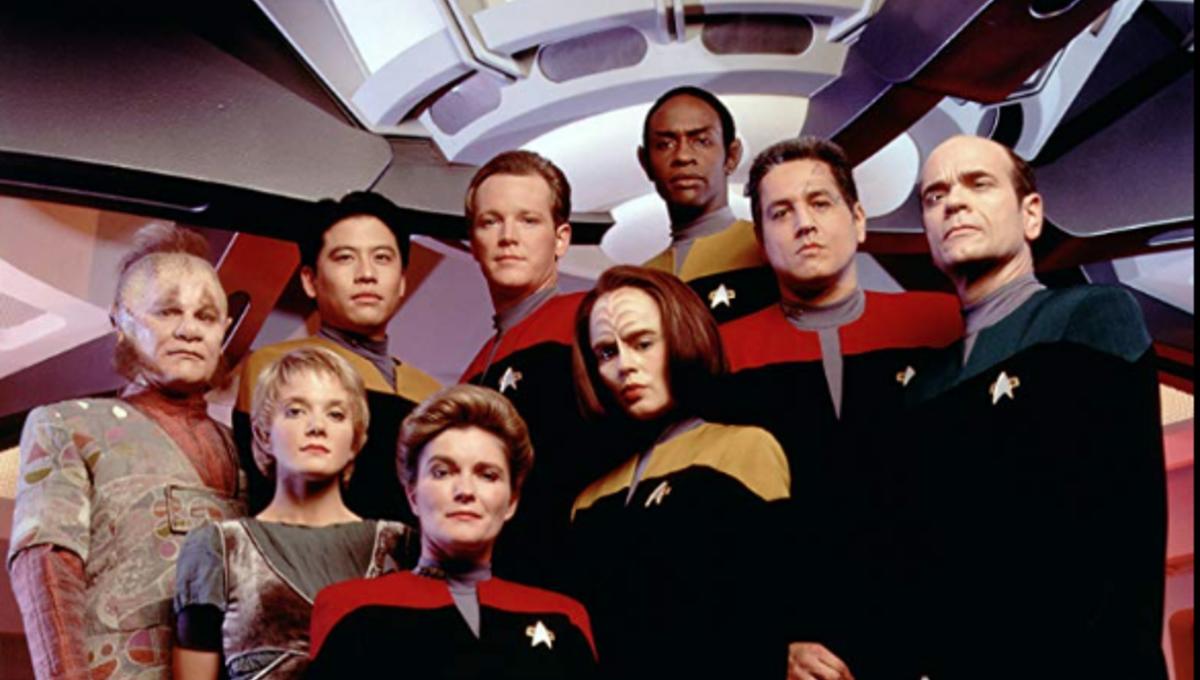 This wire buzz has some great news for comics fans, especially comics with a TV crossover. (Or TV with a comics crossover, in the case of Star Trek: Voyager.)

Starting boldly right here where no Wire Buzz has gone before, we’re pleased to announce that Star Trek: Voyager will be returning to the world of comics, with a one shot that doesn’t just take the crew to any old world in the stars, it takes them for the first time ever to the Mirror Universe. (The comic is titled, appropriately, Star Trek Voyager: Smoke and Mirrors.) It will be released in October with writing by Paul Allor and art by J.K. Woodward, and it jumpstarts a new series for IDW (and with CBS) which will take different Star Trek crews in turn into the Mirror Universe. Next up after the Voyager crew will be the crew of the original series, followed by that of Deep Space Nine.

According to IDW, the Voyager installment of the series “introduces Captain Janeway of the Voyager, a rebel ship stranded in the Delta Quadrant, far from the ruins of the Terran Empire. When Janeway crowns herself Pirate Queen of the Quadrant, the locals – including scavengers Neelix and Kes – won’t give up without a fight. Amid this conflict, the crew of the Voyager has a second problem on their hands: just who is the Terran calling herself Annika Hansen, and can she be trusted?”

In more news from the flip side of that equation (the comics-turned-TV side), we bring glad tidings for fans of Jeremy Jordan’s Winn Schott on the CW’s Supergirl, as it’s just been announced that though Jordan sat out that show’s Season 4, he’ll be back like the Terminator in Season 5. (And the Terminator literally is back this summer in Terminator: Dark Fate, so yeah, that means Jordan is very much back, at least for three episodes.) He’ll be reprising his role as Winn, Kara’s (Melissa Benoist) friend who left town (and this timeline) at the end of Season 3 to go on an adventure in the future with Mon-El, played by Chris Wood. When Mon-El came back in Season 4, there was no sign of Schott, possibly due to the actor’s schedule in American Son on Broadway. Schott/ Jordan returns towards the end of Season 5, which debuts on October 6th.

And last but not least, SDCC brings so much joy to this world, and today one of those pieces of joy was the new English-dubbed trailer for My Hero Academia Season 4.

How will young Deku adjust to life after All Might’s retirement from the superhero biz? Find out this fall when My Hero Academia returns to Funimation in October.

Vaporum Review: A Faithful Tribute That Struggles to Gain Steam