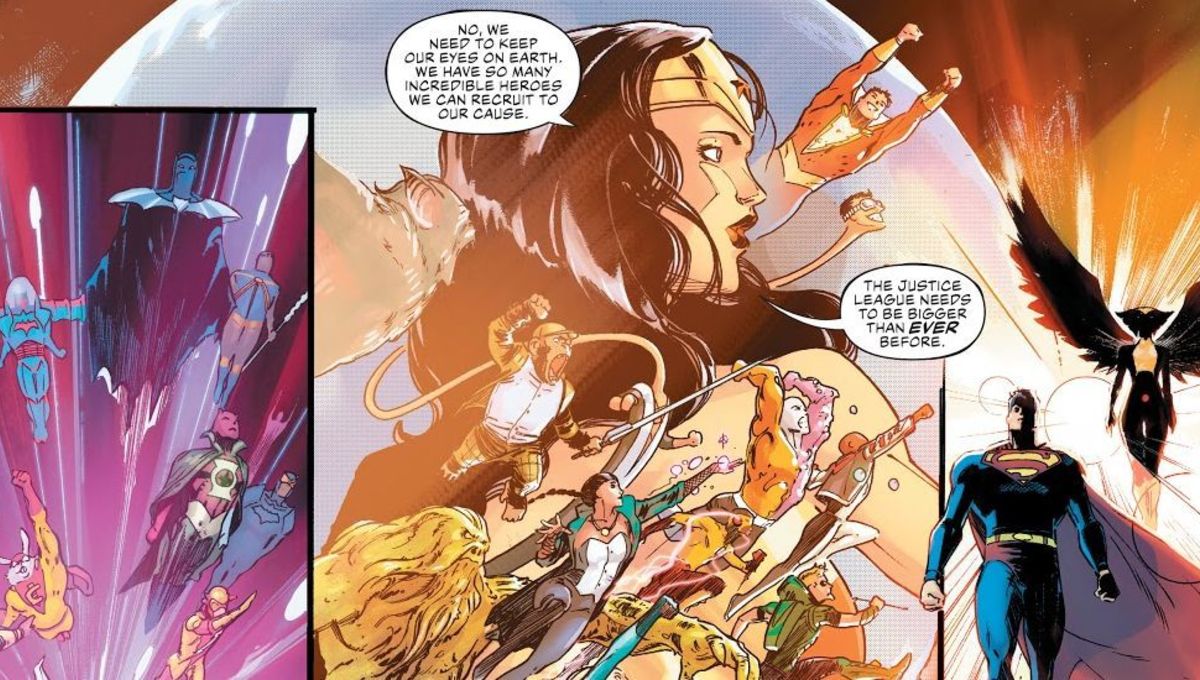 With Lex Luthor leading the world’s population into villainy, the Batman Who Laughs terrorizing the multiverse, and the evil Super Celestial Perpetua on the brink of return, the DCU has never been a darker place — and it’s all Scott Snyder‘s fault.

As one of the main architects of the current DCU, Snyder is decidedly busy; he’s in the middle of his Justice League run and just finishing up the Batman Who Laughs mini-series, spinning out of the pages of Metal. And, if Snyder gets his way, things are only going to get more chaotic for our DC Comics superheroes.

In the pages of Justice League, Superman, Batman, Wonder Woman, and the rest of the crew are now grappling with celestial powers after having traveled to the 6th dimension and back to defeat and then recruit the World Forger in their battle against Lex Luthor.

All of this, according to Snyder, is leading to a final showdown later this year as the Legion of Doom prepares for war with the Justice League over the fate of the multiverse. That ties into another one of Snyder’s upcoming projects: a reboot of the Justice Society of America, which is expected in the fall.

Though the JSA was the original superhero team (created in the late ’30s) and a regular part of the DCU until the launch of New 52 in 2011, they hadn’t been spoken of since Rebirth. It wasn’t until Geoff Johns’ Doomsday Clock that it was revealed Dr. Manhattan had all but erased them from the current timeline.

As reported by SYFY WIRE, Snyder will bring the JSA back in the pages of the upcoming Justice Doom War event (which starts at Issue 30). In that arc, the League will travel across time and space to recruit heroes from across the DCU to their side.

This week, Snyder spoke to SYFY WIRE about wrapping up the immensely popular Batman Who Laughs mini-series next month, why Justice League is his most hopeful book, and what he would like to do with the Justice Society of America.

How do you keep everything straight writing several books simultaneously?

Each one is special in its own way to me, you know? Plus, they’re so widely different from each other. My hope is that when people read them they’ll see that they’re in conversation with one another a little bit.

For example, Batman Who Laughs allows me to do the darkest exploration of whether or not Batman works, as an idea, as a superhero, as Bruce Wayne, all of it. Looking through the blackest lens. A lot of the questions about what does it mean to force people to see the best in each other and themselves in a world they might not want to. That question has echoes in Justice League and Last Knight on Earth with Greg Capullo.

Justice League gives me the brightest lens to view the lore. Meanwhile, Last Knight gives me a way of sort of transforming the DCU into a version of itself that takes that type of argument to its absolute extreme. So, in a way, they’re all really personal and they touch on the things that I worry about for my children. That said, they’re so different from each other that I work on each one for a week or two. I can’t work on more than one in the same week and DC knows this, so they know not to give me lettering for one. As long as I’m on my deadline, let me work solely on one book because they’re just different universes.

Have you been surprised by the popularity of your newest villain, the Batman Who Laughs?

I’ve been floored that fans have bought the book as much as they have. You do a book like this and I’m working with artist Jock, who is one of my best friends, and we’ve done superhero stuff but we’re known for doing psychologically, emotionally probing and disturbing stuff, not the overly bombastic superhero stuff that usually tops the charts.

So, it was a project that was really important to me because I didn’t get to explore the character in Metal and I wanted him to come at Batman in a way that really feels like the end of the road. When fans react the way they have, selling out each issue and the tie-ins, it’s just overwhelmingly gratifying and I can’t thank them enough. I’m overwhelmed and humbled by the reaction. They’re twisted and evil and we love each of them.

As seen in previews for Batman/Superman (set to launch in August), the Batman Who Laughs is still haunting the DCU after his miniseries. Can you share how he may fit in down the road with some of the other DC books?

I don’t want to give too much away but I want this story to feel really singular and individual… it’s important to me that it stands with the best stuff I’ve ever done. That was always my demand on myself and the team.

If we’re going to go back to Batman after we’d done things like “Black Mirror” in Detective Comics the only reason to do it would be if we could do something that would compete with that. I don’t want you to feel like the ending of Batman Who Laughs cheats you or has a cliffhanger. You’ll have total closure and it will feel like the end of the book.

There are things that are scary and stunning and I think will make people excited about the story, that it could happen elsewhere. To speak to that, without giving away what happens: Josh Williamson is doing Batman/Superman with David Marquez starting in August. I’ve read the first four issues and we’ve talked a lot about the opening arc, which focuses on the Batman Who Laughs series. Whether or not other characters in the DCU were infected by the serum he creates. It’s a tremendous story about the friendship and bond between Batman and Superman, and the character kind of haunts the story rather than taking [center] stage in it. It’s done in a way that I think [is] really brilliant.

There are huge plans for the Batman Who Laughs. When you see a character get traction with fans, that means the world to you — like when Court of Owls hit or James Jr. hit, it’s always such a thrill. But we also know it’s important to let characters rest for a bit. Not to overkill. Yes, you’ll see some more of Batman Who Laughs, but we don’t want you to feel like we’re trying to smother you either.

The most recent arc in Justice League had a lot of emotion behind it. Can you talk about what you were going for?

[It was the] closest thing to a thesis statement on Justice League that I’ve done and I wanted this arc to land when it comes to the spirit and heart of the project. What I was trying to convey was that alone, when confronting the problems of the world, the boundaries of our imagination feel very overwhelming. Within this arc, they see that there’s no way out of the box that they’ve created for themselves and the world by breaking the source wall, except for this really compromised future. Where it seems like the only way to proceed is to give up some of who you used to be and save some people instead of everybody.

What I wanted the arc to be about is what superheroes are there for and what the Justice League is there for, to show us as readers, when we look to each other and look outside of ourselves, the boundaries of our imaginations expand. We’re able to imagine beyond the limitations of our own individual perception.

Similarly, it’s what they do for each other as characters. I wanted it to be clear that Batman doesn’t see a way out. He thinks the World Forger is right and it’s the only way forward is to take a darker path. But, he knows if he gives Superman a chance to show him a better way, maybe Superman can. Similarly, Superman is trapped in the dark and can’t get out but he has faith that maybe one of his friends, Batman, in this case, will help him get to the other side in a way he does not see yet. It means a lot to me, this arc. I wanted to be something Jorge and I could stand on and say, “This is what our Justice League is about.”

We have some really big stuff coming up with that revisits these themes from a different angle, with Jim Cheung, Francis Manipul, Jorge, and different artists as well.

You’ll be taking on the Justice Society of America sometime this year. Can you talk about that and what you’d like to do?

We’re going to reintroduce the JSA to the mainline continuity. I couldn’t be more excited or prouder to write that team. I’ve been hoping to explore the workings and characters of that team for quite a while.

My maternal grandfather, who I was really close with, was a World War II vet and getting to do a story that involved heroes from that time, when it was so brutal, is a special thing for me. The way Geoff Johns has been able to work them back in through Doomsday Clock has been fantastic. That book has given them a tremendous amount of heat and his previous work with the characters has given me a lot of inspiration too.

I know Geoff has his own plans for some of those characters as well as other Doomsday Clock characters. So I think you’ll see a lot of JSA stuff moving forward.

Are there specific characters you’re excited to work with?

Jay Garrick and Alan Scott have loomed large in my imagination. But also Wesley Dodds is a really big one I wanted to write for obvious reasons, him being a crime writer and being a character that veers towards the darker aspects of the DCU. Wildcat, I love the idea of a character that is a boxer in the Depression.

The whole history of these characters is so tied to a moment in American history that is so sentimentalized but it wasn’t like that at all, it was really rough and brutal. It was a time when the future of the world was on the line. It’s amazing to get to explore characters, who we think of Golden Age characters, back when they were just starting out as a team.

With the stakes getting higher for the DC heroes, what can we expect from the Year of the Villain?

This functions as a culmination of a lot of the stuff we’ve been setting up in Justice League, Batman Who Laughs, and Batman/Superman. It also functions as its own powerful story about what happens when Luthor tells the villains, “I’ll give you everything you need to win, Now let’s do this.”

Whether or not the villains have thought this through and what it means on the other side. Not just when they take over the world, but what does it mean for the population of the world to want that. It’s a gripping and epic tale honestly and I’m grateful to all of the collaborators who are a part of it, from Brian Michael Bendis to James Tynion, Josh Williamson and everyone. It’ll be a big team effort.

The many religions of the X-Men

X-Men, Fantastic 4 probably won't hit the MCU until at least 2021 or later