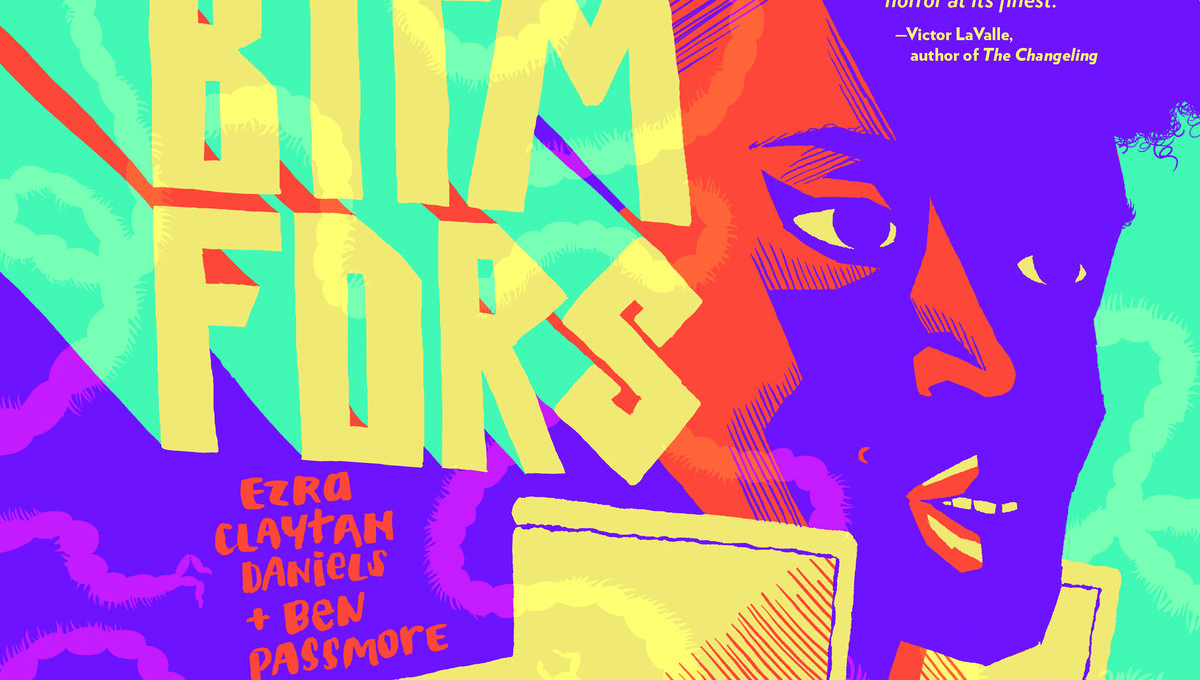 Ezra Claytan Daniels takes his time crafting stories. It took him 15 years to write his award-winning graphic novel Upgrade Soul. Before that, he had developed a little story about how gentrification sucks the life out of an urban neighborhood’s residents — literally. It still needed work, so he put it down to concentrate on Upgrade Soul. An award or two later, Daniels turned back to the story and began reworking it.

Not willing to take on the monumental task of both drawing and coloring a graphic novel again, Daniels decided to hire an artist with the same sensibilities to take on the horror comic with him. Luckily, artist Ben Passmore was not only willing but brilliant. As luck would have it, he’d just won an Ignatz Award (and an Eisner nod) for Your Black Friend, which tackled a similar subject. The two hit it off and a partnership and BTTM FDRS were born.

BTTM FDRS (Fantagraphics) follows two recent art school grads Cynthia and Darla as the latter moves to a blighted fictional neighborhood on the south side of Chicago looking for cheap rent to coordinate with her budding fashion career. Besides her landlord, a creepy super, and disappearing tenants, Darla discovers something lurking within the walls of her new home.

SYFY WIRE sat down with Claytan Daniels and Passmore to find out how they convinced Fantagraphics to publish their book about body horror and gentrification and why it’s all just a metaphor for hip-hop.

Why did you choose Chicago as the setting of the story?

Ezra Claytan Daniels: Chicago is where I was living when I came up with the story and it has a really interesting and really kind of amplified perspective on gentrification and appropriation. I think mostly because it’s such a segregated city.

I think Chicago also has a really great history of horror represented in fiction. I think a lot of our major, major inspirations for this story are horror stories set in Chicago, like Candyman and Child’s Play.

How did you two end up collaborating on the story?

Claytan Daniels: I was looking for somebody else [to] draw it who I knew or who I was a fan of that I would want to work with. I coincidently met Ben at CAKE around that same time. I instantly fell in love with Ben’s work. Ben and I hit it off in person really well because we’re both mixed [race] dudes from small towns. So we have a really similar life experience, opinions, and perspectives, so we were just a really natural fit. I hit him up to see if he wanted to draw this book. And luckily it was right before Your Black Friend came out. So he was still a zero.

Well, you both went from zero to hero. Did you then use that newfound celebrity to convince Fantagraphics to publish this story?

Ben Passmore: From my POV, that’s basically what happened.

I had done a really short comic for the NOW Anthology that Eric Reynolds edits that’s published with them, so I’d done a little work with them. I think they were really into looking at BTTM FDRS by that time.

Claytan Daniels: The book was a really easy sell for us because it came on the heels of Get Out. I think every gatekeeper in Hollywood and in comics publishing was looking for something [like Get Out] and BTTM FDRS just happened to check all those boxes. Ben was coming off his Eisner nomination and his Ignatz Award for YBF and Upgrade Soul was just starting to get a lot of heat.

The BTTM FDRS title feels like it has several meanings in the book.

Claytan Daniels: [There are] many layers. Cynthia and [Darla’s designer boss] Jean both represent people that are trying to feed off of the neighborhood that they see as being at the very bottom of the social hierarchy.

The title is also a derogatory term that was originally used to describe the people who live there. There’s kind of [a] third meaning to the title, which is that it’s just a subtle reference to “Back of the Yards,” which is a real neighborhood on the south side of Chicago.

Ben, what was your reaction when Ezra first explained the story to you?

Passmore: Ezra, it’s an amazing cartoonist. So it was written in a way that I could see in my head. All the pacing was super tight. The way I write scripts is panel by panel and this was more like a movie script. He is a very meticulous and calculated writer and that really bears out in the script. Ezra rides this really great line between making a story that is very political and obviously editorial, without sacrificing the story at all.

What was it like handing off half of the creative process?

Passmore: He was incredibly hands-off, honestly. We had our own little comics camp [when] I went to Los Angeles and stayed with Ezra for a week and we sort of poured over inspirations for the book character designs. And with the exception of a couple panels, we didn’t really go over edits a whole lot, which is good for me. I’m very controlling and opinionated about the art that I do, so I’m not massively interested in getting edited.

Claytan Daniels: That’s probably a big reason why I didn’t give you many edits.

Was one of those discussions about color? Because this has a bright and warm palette for a horror story.

Passmore: Initially, I think Ezra wanted to gray tone, which is obviously much faster. I stupidly suggested that doing monochromatic, with a complimentary triad, would be just as efficient, which it clearly isn’t. I am really interested in non-literal coloring, which I think is being mostly inspired by a lot of French comics. I think a lot of [horror comics] suffer from trying to go with black, a lot of muddy browns and a lot of blue.

Because of this, I feel like people often in horror see the scares coming based off of the color or the tone. I just wanted people to have this constant feeling of not knowing what the colors meant, but them being sort of ominous but not in a way that they are familiar with.

You’ve mentioned gentrification and class/race privilege. Is that the only theme that you want people to get from the story?

Claytan Daniels: There is actually a secret theme to BTTM FDRS.

On the surface [it] is about gentrification. But the story is actually mapped to cultural appropriation in hip hop specifically. All of the characters in the story represent archetypes in the cycle of cultural appropriation [in that genre]. So Darla and Cynthia represent like a Nikki Minaj/Iggy Azalea type of conflict. Gene, the landlord, represents the record label guy. Everybody is attracted to this building, which is a symbol for hip hop culture specifically and Gene sees there’s money to be made, but he doesn’t quite understand why. He just knows he has to fill it with attractive young people.

And then Patrick represents the music nerd guy who’s super into rap theory, who’s like all about the liner notes, but has everything wrong because he’s not part of the culture and doesn’t have an organic understanding of things. And then Chucky represents the O.G. Grandmaster Flash, who came up organically in the scene but was never really given a shot at the throne that somebody like Iggy Azalea is just handed.

You both tend to do graphic novels. Do you prefer that over floppies?

Claytan Daniels: I feel like I as a reader personally prefer to have the story all in my hands at once. I hate buying a floppy and then two months later remembering that I didn’t get the second issue and then buying the second issue but then not remembering anything about the first issue. I like when stories have a self-contained story arc.

Will you two team up again on another project?

Claytan Daniels: We have been talking about doing a BTTM FDRS 2. We’ll see if it’s a success and people want more. I’ve got a huge document full of ideas for the sequel and Ben and I’ve talked a lot about it on our tour.

The MCU and a Bat-Joker rule WonderCon Day 1 cosplay