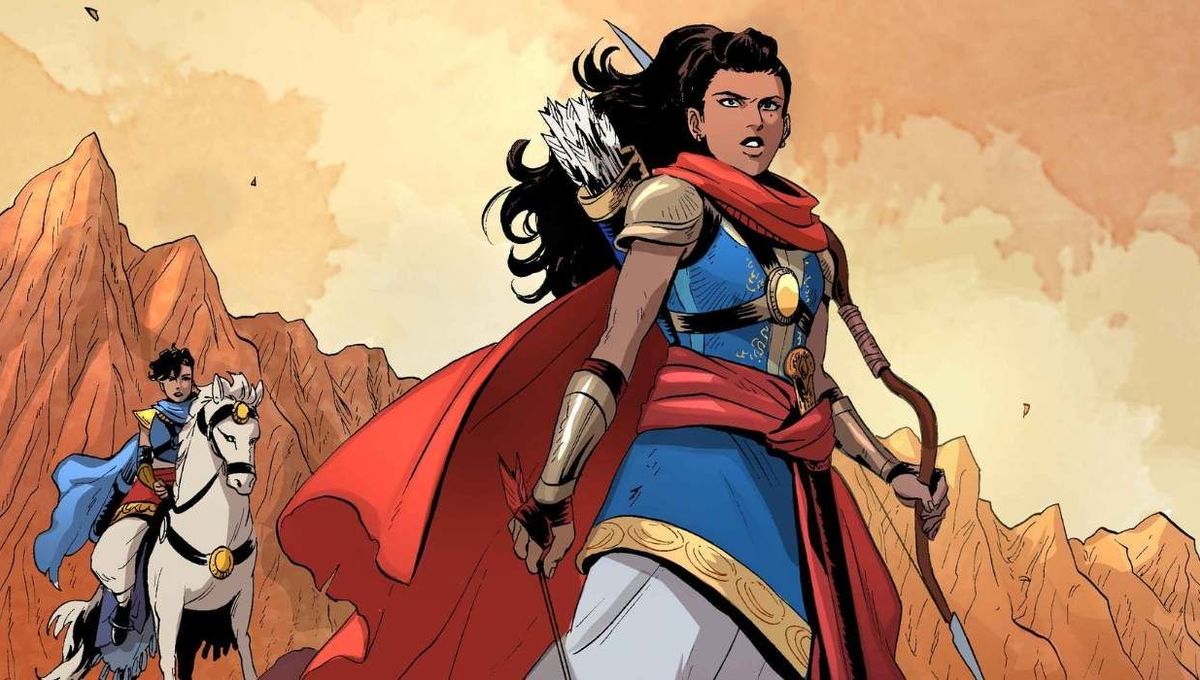 When writer Jon Tsuei was a child, almost every business in his San Francisco neighborhood had a Mortal Kombat cabinet. He used to battle the neighborhood kids on one at the store up the street from his mom’s clothing boutique after school. With a steady diet of bootleg Jackie Chan and Jet Li movies, anime, and video games, Tsuei had a vivid imagination and a love of fantasy from an early age.

As an adult, at San Diego Comic-Con, he met a kindred spirit in Jerry Ma, who would become his friend and collaborate with him on his first published piece in Secret Identities: The Asian American Superhero Anthology (The New Press). It was a short piece, but those four pages turned into Jon Tsuei’s first published work in the comic book industry.

Around the same time, he met artist and animator Eric Canete and the two of them collaborated on both Comic Book Tattoo Tales Inspired by Tori Amos (Image), an anthology based on the singer’s lyrics, and the stunning yet short-lived RunLoveKill (Image). Then, after Tsuei met Kelly Sue DeConnick at an Image Expo and she introduced him to artist Valentine DeLandro, more friendships were fostered, which is how Tsuei ended up writing for Bitch Planet Triple Feature #5 (Image).

But what Tsuei really wanted was a full book, and his interest in ancient Asian mythology and fanboying over Mad Max fan art led to his most ambitious work to date: Sera and the Royal Stars (Vault), drawn by Audrey Mok (Betty & Veronica, Josie and the Pussycats) and colored by Raul Angulo (Angel). A story about a warrior princess in ancient Parsa, who, in the midst of a civil war, has a vision from the Goddess Mitra who instructs her to find all of the Royal Stars, now trapped on Earth. The only problem is, she’s got to save her family and figure out how to stave off a famine at the same time.

SYFY WIRE spoke with Tsuei about Sera, what happened to RunLoveKill, and why his mom is really a superhero.

Did you start writing your own stories as a child?

Jon Tsuei: When I was a child, every action figure had a personality and individual story arc. Yeah, I was a weird kid. I didn’t actually put pen to paper for myself until I was in my late teens. It was a mix of journals and bad poetry. The first short story I wrote was in my early twenties. My whole childhood was playing Street Fighter, Final Fantasy and watching Kung Fu movies and anime.

Did those genres influence your work?

It’s funny because a lot of people say they can see Final Fantasy VI (my favorite of the series) in Sera and the Royal Stars. I played that game to death. It had one of those clock counters telling you how many hours you play? I maxed it out at 99 hours in 99 minutes.

What anime where you were you into?

The anime Record of Lodoss War was one of my first introductions to fantasy I watched to death as a kid. It was huge for me. I stopped watching anime hardcore at Cowboy Bebop. I feel like we’re now kind of in a period of storytelling where most stories fall into this kind of grim, dark mold. So, I actually watch a lot of lighter stuff now like Studio Ghibli films. They have a sense of hope.

Both Rain from RunLoveKill and Sera suffer loss, but hope and strength propel them forward. Is that a common theme in your work?

It’s very easy to put a woman in the story and just make her tough. When it comes to my writing, the idea of the divine feminine always comes into play. If you look at old mythology, female goddesses were multifaceted. If you look at Kali, for instance, Kali is the Hindu goddess of destruction, but she’s also a goddess of fertility. There’s more to her I feel we’ve lost as time has gone on and as things like patriarchy have [rewritten] the roles of who women are in society.

My mom. She’s the youngest, the only girl and was the first one in her family to come to America. She worked her butt off to get her entire family here. One by one she brought her brother, my brother and eventually, my grandparents were able to come too. I constantly saw her work and try to do her best for myself and my sister along with her own siblings. We didn’t take vacations when I was a kid. My parents are always working, [then when they] divorced, she was a single parent, working seven days a week. She’s the toughest person I know.

I think a lot of that influenced a lot of characters [I write]. When something’s in front of them, they know they’ve got a task at hand and it’s for the greater good, so they won’t let things slow them down. All the things I saw in my mom. So hopefully some of these characters can do her justice.

When did you realize that you could make a living writing and how did you explain that to her?

By my mid-twenties I had worked all sorts of jobs (DJ, bartender, insurance salesman, soul-sucking retail) and I was tired of it all. I thought back to that weird kid making up stories and thought, “Maybe I can get paid to do that.” I went back to college to study creative writing, then dropped out and moved to Southern California to be closer to the entertainment industry and pursue writing. My mom was sad but also extremely supportive. Now I’m back in the Bay Area and I get to visit her regularly. It all worked out in the end!

Did you and Eric Canete pitch RunLoveKill to Image or did they approach you?

It’s something that we started planning and thinking about. The hard part was finding breaks in Eric’s schedule to actually do it. The original plan for RunLoveKill was actually to do it as a very short one-shot story. But a one-off story with brand new characters is really hard to sell. We realized that we had to sell them on a larger story.

Unfortunately, in the end, we didn’t get a chance to finish RunLoveKill, because Eric was working a full-time job in the video game industry, while he was drawing the book which is essentially two full-time jobs. I’m so sad about that, but you gotta move on and do other things.

How did you approach the world-building of Sera and the Royal Stars?

It actually started with research about the Royal Stars themselves. It’s a Western astrology concept that originated with the Zoroastrian texts. I love to research. I have a tendency to get lost in that part for a while. I dove into a lot of the mythology of Ancient Persia and Asia. How the different gods have been incorporated into surrounding cultures.

Yeah. I think when you look at a lot of mythology, gods have always been messing with human lives. [In this case] This God figure shows up and essentially just messes up Sera’s life. And everybody around her is also kind of screwed up now because of this. There’s always this impending doom about to happen and a chosen “one” that has to go in and fix things. But for whatever reason, the gods don’t fix it themselves. They choose one of us to do it for them.

Audrey Mok’s artwork is beautiful. How did you two get connected?

I found Audrey’s work online, just kind of being plugged into the comic book community on Twitter and Instagram. This was before she had done Josie and the Pussycats. She had done fan art of Mad Max: Fury Road focusing on the War Boys. So I ordered it from her not knowing that she was actually in Hong Kong. Her stuff is gorgeous and I really hoped to [work with her one day] because she’s just so good. She’s a very good storyteller.

Has the story changed much from your original concept?

At first, Roya and Jahar weren’t Sera’s brother and sister, they were just soldiers under her command, but also her best friends. As I kind of got deeper into the story, I spoke to Adrian and Audrey about it and [realized] the family element needed to play a bigger role and Roya and Jahar became Sera’s siblings. It wasn’t a civil war in the beginning either. It was an invading army, which when I made Sera’s Uncle and his armies the invading force. I was just kind of playing off how a family is complicated.

What are you working on next?

I’ve been interested in cyberpunk as a genre lady lately and trying to interrogate it. How do I reconcile the use of Asian aesthetics in the genre, without any Asian characters being the focus? When I’m not working on Sera, I’m thinking about that. I do have a story there.