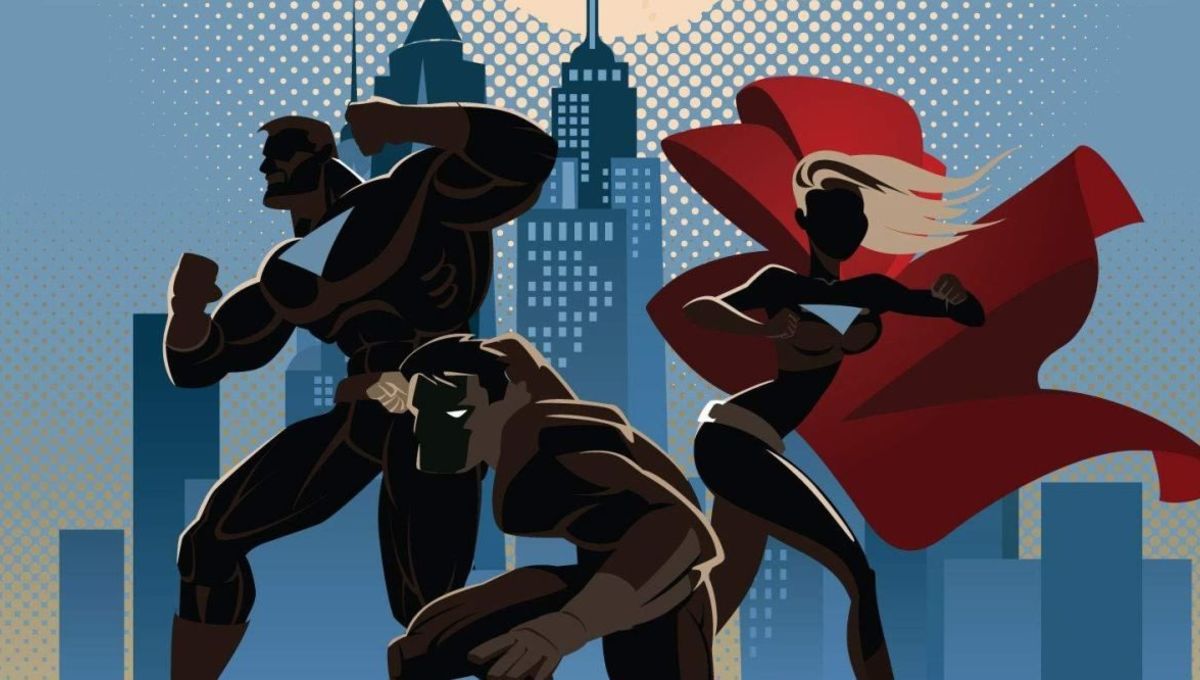 The link between the military and comic books goes all the way back to the 1930s, long before Captain America was feeding Hitler a knuckle sandwich and Superman, Batman, and Robin were selling war bonds to fund the fight against the Axis powers.

In the new book from Mango Publishing, Super Soldiers: A Salute to the Heroes and Villains Who Fought for Their Country, author Jason Inman explores the storied connection between the armed forces and comic heroes and villains. He doesn’t just touch on the obvious candidates, like Captain America, Sgt. Rock, and Frank Castle, either; also enlisted are comic strip stars such as Beetle Bailey.

For Inman, this project was intensely personal. He’s a veteran himself, having served six years in the U.S. Army, including nearly a year in Iraq during Operation Iraqi Freedom with the 891st Engineer Battalion. It was during his time in Iraq that Inman fell back in love with comics. Inman would ask himself then why so many comic book heroes, from Nick Fury to U.S. Agent, seemed to have a military background.

With Super Soldiers, Inman shows the effects their tours of duty had on these fictional heroes. Weaving his own experiences from the frontlines into his writing, Inman provides a perspective that gives us true insight into these soldiers-turned-superheroes.

Inman is a well-known voice in the geekosphere, in part thanks to his time as co-host of DC All-Access and as the co-host of Geek History Lesson podcast alongside Ashley Robinson. Between these two intermingling facets of his life, it all adds up to a very different type of book about the heroes we think we know so well.

SYFY WIRE has an exclusive excerpt from Super Soldiers to share with you that centers on Captain Atom and his time in the military. Inman found working on this chapter intensely personal because of a shared belief with the character that the biggest loss some military members face is time.

In Captain Atom #1, we were introduced to Nathaniel Christopher Adam in the 1960s. He was tied to a chair in an odd metal room and, over the course of the issue, we learn how he got there. He was a United States Air Force officer who had been framed for a crime he did not commit. To avoid execution, Nate agreed to participate in a secret government experiment under the watch of Col. Wade Eiling. This undertaking granted Nate little chance of survival, but it did ensure him a presidential pardon if he survived. The opening pages of his debut issue featured Nate telling a series of jokes as he faced death, performing a story about a man who was suing his wife for divorce while he pled with Eiling to keep his promise and deliver a letter to Nate’s wife.

What is it about the connection between the military and the story’s need for characters to volunteer for extreme experiments for the greater good? Our armed forces in the United States ended the draft for soldiers in 1973, and ever since then, our fighting force has been a volunteer army. I volunteered for the US Army myself. Nevertheless, several stories about service members volunteering exist, going all the way back to Captain America’s very first issue, as I mentioned way back in Chapter 1! Is it the drive to serve? The motivation to benefit humanity as a whole? While I see several connections between soldiers and this motivation, this plot device seems to be a shorthand many writers want to employ in their American-grown myths. If we prove our characters are brave enough for armed service, then they are certainly brave enough to be plugged into the Gizmacular 2000 Mackatron Device! (Patent pending by scientist Jason Inman.) It’s certainly a trope I would like to see leave fiction. Armed service members are brave, I do not deny that. Still, they’re not the only ones dumb enough to be poked and prodded by scientists. Many humans out there are willing to do crazier things for way less reward or less noble motivations.

Back in the story, Nate’s experiment went off! The room filled with energy and revealed that Nathaniel had disappeared. Little did Nate know that he was being signed up for an experiment even more out-of-this-world and ludicrous—even by comic book standards. His experiment was designed to test the strength of an alien ship’s hull. Of course, the only way to test something like that back in the 1960s? Detonate a nuclear bomb under it while a live human being sits inside and see if he survives! Nathaniel Christopher Adam was this human, and it appeared to the observing scientists and airmen that Nate did not survive the force of the blast. The shielding must not have been so effective after all. Thankfully, Nate exists in a comic book. This would not be his last adventure.

After the experiment, a form was observed on the air base. It spooked a plane that was coming into land and scared some guards. It wasn’t much more than a jumble of body parts and flesh that stalked across the airbase. It glowed and moaned as several airmen tried to subdue it. Once they had captured the form and trapped it inside a room, its flesh began to change. It molded into a shiny silvery skin, like the glossy metal you might see on the side of overpriced hubcaps, and at last, it finally appeared human. The military personnel and scientists first hypothesized it may have been an alien life form merely mimicking human form, only, right then, General Eiling came on the scene and had a revelation while everyone else stood around telling jokes. Eiling dismissed the men because he recognized the form as a silver version of Nathaniel Christopher Adam, the very man everyone thought had not survived the experiment he’d volunteered for. Nate noticed the general and was confused — when did the colonel he knew become a general? Then the general dropped a knowledge bomb on Nate, poised to destroy his entire world. From Nate’s perspective it had only been a day since the experiment, but, for Eiling and the rest of the world, twenty years had passed!

Being detached from the movement of time is a common theme in many soldier stories. Think of the most famous comic soldier of all time, Captain America! Steve Rogers’ whole story hinges on being removed from his natural world in the 1940s and forced to reckon with the advancements of today. At the beginning of their origins, these two captains are very analogous. Captain Atom similarly loses twenty years of life with his family. Nate finds out that General Eiling became the second husband to his now-deceased wife and his daughter has grown up. Consider the implications of that aspect. Every elder family member Adam knew is probably deceased now. The friends he had when he was alive would have thought him dead for over twenty years.

Every connection he would have had to the world is long gone. It’s a frightening prospect. We all seek those touchstones in every aspect of our lives, and losing them all in one fell swoop would be rough.

It is similar to the feeling faced by every soldier who gets deployed. Whether the writers of Captain Atom made this choice intentionally or not, it is a perfect representation of an important aspect of military life. I have even experienced this myself. When you find yourself on deployment, it’s hard not to think that the entire world is moving on without you, and, in truth, the world is moving on. You find yourself stuck in one location, performing the same missions day after day, and it soon feels like you are stuck in time. It becomes a trap you think you will never escape from. This eternal sad truth soon reveals itself as you lose fellow soldiers. Some people never escape that feeling. What will it be like once I can return to my life? Will I be able to return to my job and fit in like before? Will my significant other or girlfriend still love me? Will hamburgers still taste the same? (Answer: They taste better now.) Everything could have changed, but, since you are in the service, you have not been allowed to.

From Super Soldiers: A Salute to the Comic Book Heroes and Villains Who Fought for Their Country by Jason Inman, published by Mango Publishing. Copyright ©2019 Jason Inman.