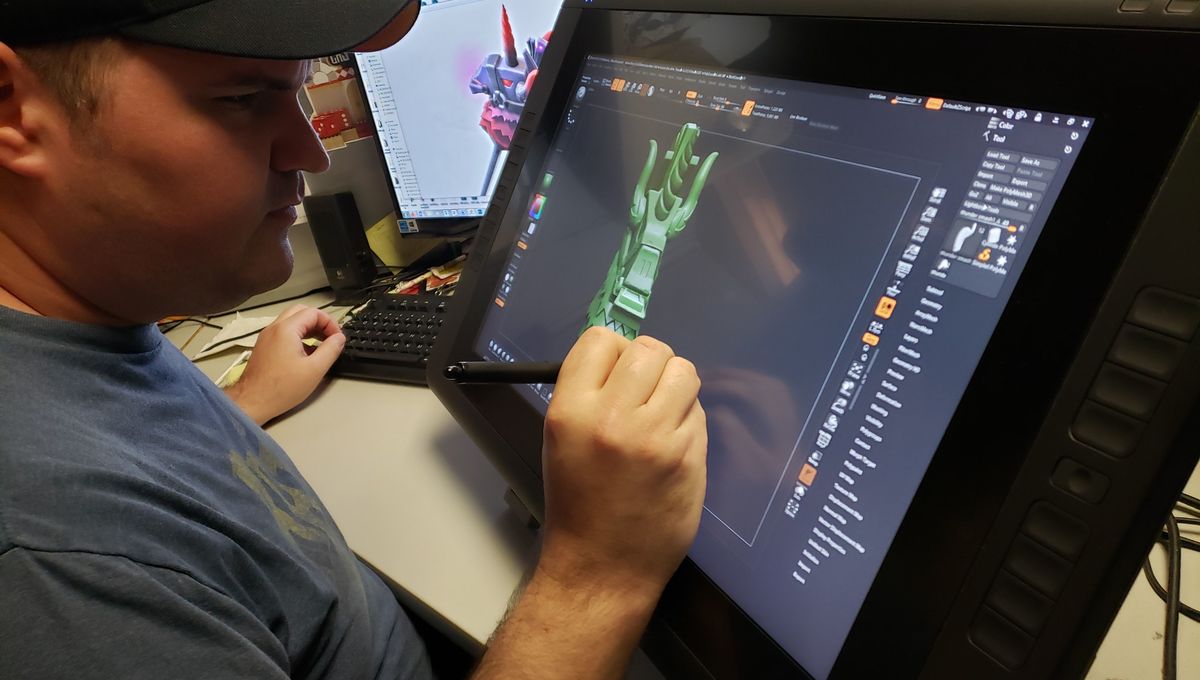 As a kid, Jordan Butler loved it when his favorite heroes, like Daredevil, Batman and Spider-Man summoned the strength to rise against all odds and make one final stand for justice against whichever villain was torturing them that day. Now, he’s working as a digital sculptor for McFarlane Toys, and it’s his job to capture the spirit of those kinds of inspiring moments in three dimensions.

As a sculptor, Butler digitally builds parts for toys from start to finish, including cutting and keying parts for articulation or assembly, digitally painting, and rendering items for packaging or instructions as needed. What that translates into is designing cool Fortnite characters like Ragnarok or Thundercrash and their accessories including guns, melee weapons, and backpacks.

During his time at McFarlane Toys, Butler has worked on everything from South Park to Rick and Morty; Spawn to RBW. With the recent announcement that McFarlane will take on DC characters, he’s also excited to return to his comic book roots.

“Any story where the costume gets ripped apart can get my attention,” Butler tells SYFY WIRE. “Batman’s costume is cool, but get him fighting Killer Croc or Man-Bat and rip his suit apart. Smash Spider-Man under a building and his mask is barely holding on in the rubble? You got me, I’m a sucker for those visuals.”

Butler spoke with SYFY WIRE about his work at McFarlane Toys, how he landed the gig in the first place, and what advice he has for artists looking to work in the growing world of figures and toys.

Walk us through the basic steps of creating a toy or figure. At what point do you get involved?

When McFarlane Toys is making an action figure, it all starts with deciding what characters to make into plastic works of art. We have a division of the company that coordinates with the licensors (like DC, Fortnite, and more) and together they’ll come up with a lineup of characters that were planning on making toys of. Once that has been decided and approved, sculptors like me will get involved.

I’ll be given the character and accessory reference images and start sculpting from there, trying to get as accurate a representation of the source material as possible. From there, when the sculpt is done it’s essentially a statue at this point and needs to be cut apart for adding in the articulation.

After the cutting is done we’ll collect the individual pieces and send the 3D files to the factory where molds are made and the toy is brought to life in plastic form. They are then painted, assembled and then shipped for fans everywhere to enjoy.

How did you first got into sculpting and when did you know that you wanted to do it as a career?

When I was starting out in college I didn’t know what I wanted to do for a career, I had taken a variety of classes trying to figure it out and decided I didn’t want to go into accounting or anything like that. I needed something that was challenging, visual, kept my interest and didn’t feel like I was on an assembly line.

Having developed a skill of drawing since about age 11, I knew that I could bring that creativity to making 3D animation for movies or games or whatever. I decided to get a general degree in 3D animation, because it fit a lot of those areas and has a constantly growing demand. Having to go through the various steps of production I quickly realized that I didn’t like animating or programming, but I did enjoy sculpting and modeling and [had] a pretty good grasp of it and maybe could make a career out of it.

What was your big break?

I was working for McFarlane toys as a graphic designer making images and videos when they needed help keeping up with the demand for the newly-formed construction sets. I had to do double duty for a while, but I was able to make the switch.

Before joining McFarlane Toys I was employed as a school bus driver doing freelance work on the side. I had a conversation with an employee of the company at a comic convention and found that they needed some freelance work done doing some graphic design for the marketing department. I did one project and then another and within a few months I was able to make it a full-time position.

What’s the best part of your job?

Probably the best is that I get to see an item on the shelf in a store somewhere in physical form and know that I had a part in making a toy that somebody is going to collect and play with. It’s really a great payoff for the time and effort involved.

One of the projects that I loved working on was the Rick and Morty Construction sets, just trying to translate the craziness of that show into brick form was some of the most fun I’ve had. I really hope we get to do something with that show again.

What makes your job difficult? What are some of the unseen steps to creating figures?

One of the hardest things is interpreting a 2-dimensional figure into 3D space. With some of the characters, they’ll look a certain way and shape and they’ll have another shape when they turn to the side or back. Trying to navigate that transition and have something that looks good at all angles can be a real challenge.

Also, when the software crashes and you end up losing some really good progress on a figure. nobody is immune to it. Every once and a while a co-worker or I are bellowing some sort of frustration because the software we’re using crashed at the worst time.”

What advice can you offer someone looking to break into the business?

I’ve got a few things that I’ve learned from my own experience. Number one — put the time and effort in, whatever level of natural talent you have, put in the time and practice to turn it into a skill. To my friends, when I tell them how I got to do art for a living, I would describe myself as a square peg that made its way through the round hole (with a lot of effort). What makes the difference between a good driver on the road and a bad one? The time they put in to learn how to do it, it’s the same with art.

Number two — in most cases nobody is going to come knocking on your door, you can be the best artist alive but if nobody sees your work and you never apply for a job, chances are won’t get one. Number three — if the job you want isn’t available find something adjacent you can do that may be a doorway to the career you want, for me it was a graphic design position.

I hope that anybody that reads this that If they are looking to sculpting and making toys as a career It can help know that their path doesn’t have to be straight as long as they know where they want to go they can get there.

Can you take me through a typical day of work or is always something different? As you said, you wear a lot of hats at McFarlane. Take me through a Tuesday or Wednesday.

“Really, what I do depends on the week, Most days I spend sculpting characters or accessories for figures — guns, melee weapons, backpacks, etc. Those can take anywhere from a single day to two depending on how much detail needs to go into them. When the sculpting is done they need to be sized to the figure they are going with to make sure they can hold whatever it is that goes with it. Also, you need to think of the item as a balloon, there can’t be any holes or random shapes floating around or giant pockets anywhere hidden. From time to time there needs to be some modification to make sure that it can be removed from the mold, like ice from an ice cube tray, you need it to pop right out otherwise the plastic could tear or get stuck. All of those little things add up to take time.

A few days each month I’m in charge of getting things ready for publishing. I’ve been part of, and now responsible for the instructions for the McFarlane construction sets, assembling the assets, making sense of them and getting the files’ output so they can be sent to print. I also have the responsibility of putting together the Spawn and Spawn-related comic books and collected editions, gathering the art, text, sometimes making the ads if we need that as well. I even collaborated on a comic cover with Todd McFarlane a few years ago. I was a full-time graphic designer when I started and picked up things as needed.

Some days I’ll jump between all three sculpting, instructions and comics if deadlines demand it.