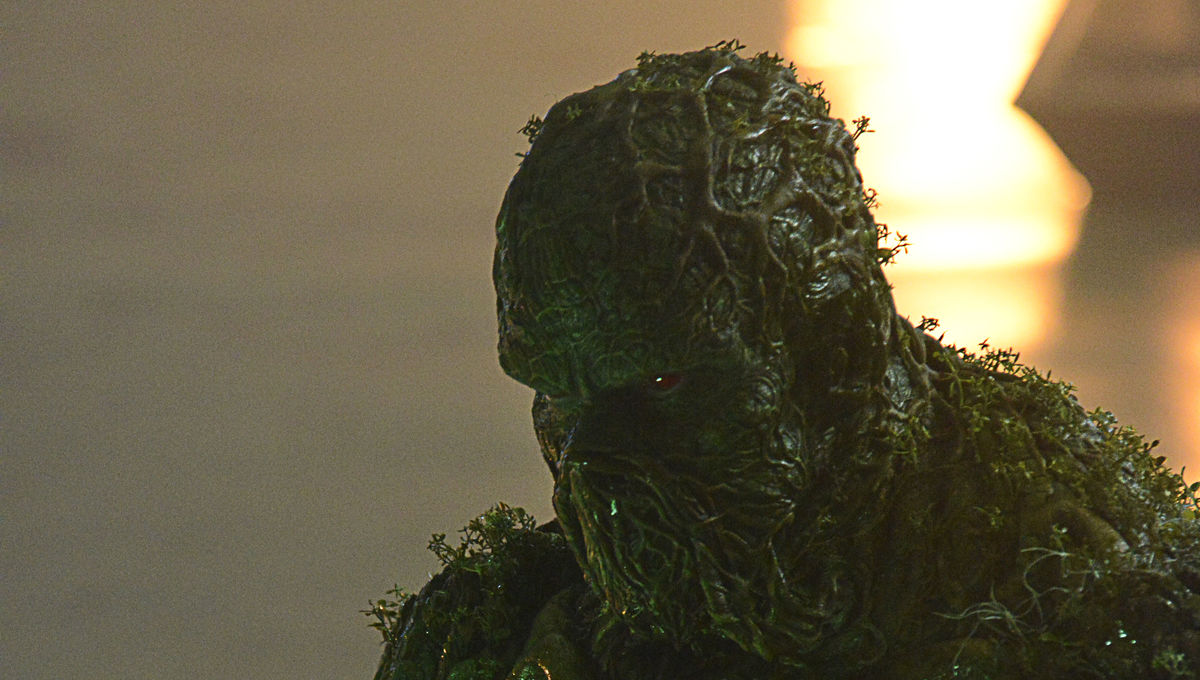 The DC Universe is about to bring something truly astonishing from the depths with its upcoming live-action adaptation of Swamp Thing: a return to practical effects. Yes, behind all that green sludge isn’t some computer-generated skeleton, it’s actually Mr. Swamp Thing (Derek Mears) himself. Don’t be fooled though, there’s nothing average about DC Universes’s reimagining of the guardian of the Green.

In an age where computerized special effects seem like the default, there’s something refreshing about seeing a moving, breathing Swamp Thing. Speaking with Entertainment Weekly about the use of a practical effects suit instead of CGI (computer-generated imagery), co-showrunner Mark Verheiden (The Mask) said, “We wanted a guy in that costume, to see a human being underneath, animating that suit.”

Verheiden added, “A big part of what we were able to accomplish was creating a suit that Derek Mears was able to perform through, so you could feel the humanity of this character.”

The creator of the suit is none other than special effects legend Justin Raleigh (Aquaman, Westworld) and his team at Fractured FX. Raleigh’s been in the effects game for over 25 years and it shows. In an interview with CinemaBlend, Mears called his Swamp Thing costume the Cadillac of suits, and that the team behind the suit refused to settle for anything less than perfect — at times even dipping into their own profits to make it happen. Now that’s what we call dedication.

So why all the blub blub… oops, we mean hub-bub over a suit? The suit is kind of the soul of Swamp Thing. Viewers must be able to believe in and identify with the emotions Mears expresses as the creature. Being able to see those emotions is as important as being able to see those expressed by his alter ego, the scientist Alec Holland, played by Andy Bean (It: Chapter Two).

The team behind Swamp Thing hopes the suit (along with the freedom of streaming) will help set it apart from previous television adaptations, like USA’s 1990s TV series. Verheiden and co-showrunner Gary Dauberman (The Nun) are joined by contemporary horror master exec producers James Wan and Len Wiseman, and hoping to push the boundaries of gore and violence on television.

Swamp Thing originated in the 1970s comic by Len Wein and Bernie Wrightson. Alan Moore took the reins in The Saga of the Swamp Thing from 1984 to 1987. According to Dauberman, Moore’s run greatly influenced the team behind the DC Universe adaption, in particular, the inclusion of Holland’s love interest Abby Arcane.

The plot of Swamp Thing centers on a government official attempting to find the source of the poison being illegally dumped into a nearby swamp. As a swamp-borne illness causes nearby residents to become sick, Center for Disease Control specialist Abby Arcane (Crystal Reed) returns home to investigate. Fans of Moore’s Swamp Thing run will note some changes to Arcane’s character from an empath nurse to CDC specialist.

Abby develops a friendship while working with Holland to find the origin of the illness. Those feelings deepen after Holland turns into Swamp Thing. It’s part of why using a practical effects suit was so paramount.

“You feel the love he feels, and since such a big part of this story is the romance that burgeons between Swamp Thing and Abby Arcane, their romance/respect/interest in one another, it’s important that we have that connective feel in the suit,” said Verheiden.

Season 1 of Swamp Thing premieres on DC Universe this Friday, May 31.

Indie Comics Spotlight: New horror comic is a metaphor for gentrification and hip-hop

The 10 Best Gifts That Every Firefly Fan Wants