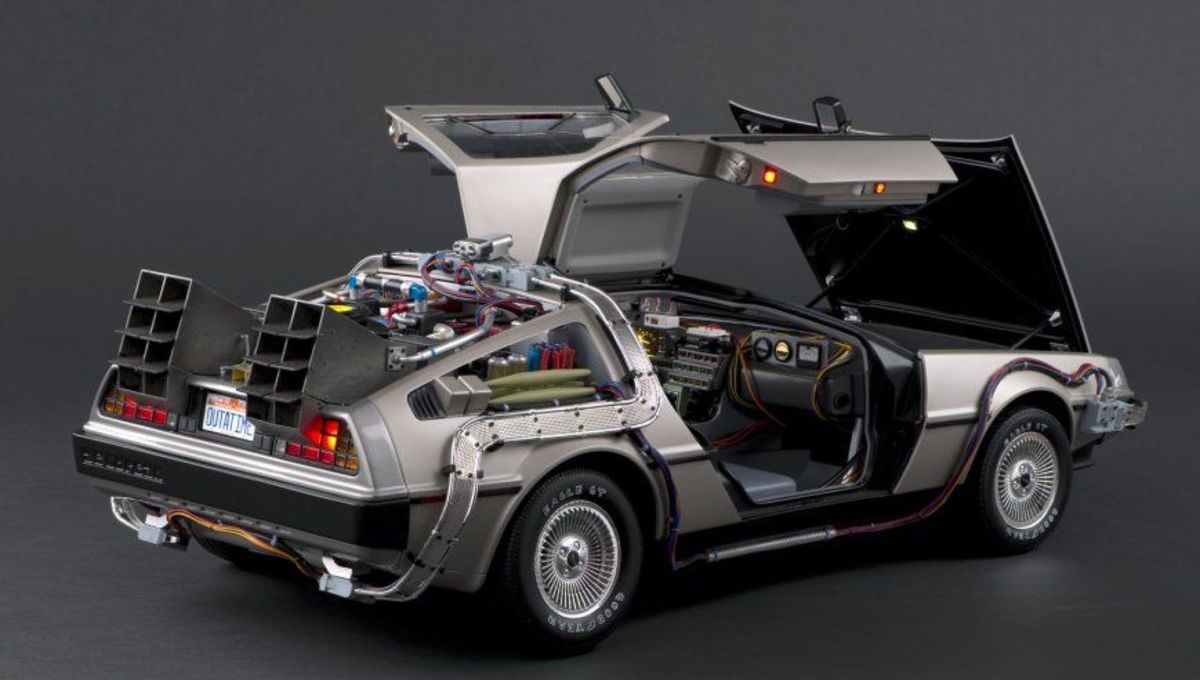 Welcome back to Important Toy News, the SYFY WIRE column that exposes the best of the week in toy culture. Join me as I take you on an incredible journey through a new world of toys and collectibles you didn’t know you needed. Together, we will take the physical challenge with a game I call “how fast can we drain that wallet” by filling our lives with tasty, tasty shelf candy.

We have a lot to cover this week, so let’s jump right back into that toy bin and start this week off with a new batch of movie toys!

We’re going back in time and our first stop is the ’80s! Eaglemoss Collections is bringing the world a 1:8 scale die-cast DeLorean model kit from Back to the Future. However, this 20-inch beauty cannot simply be purchased from a collectibles website and built. Oh no, there is a catch.

You see, this car is built up with a subscription service. From what we can see, you purchase a subscription to the official Back to the Future magazine. Parts come with each issue. Thus, in order to build the entire car, you have to subscribe to 130 issues at $10.95 each. Add in shipping and handling, and you’re looking at a $1,670 model kit (roughly).

Sure, it’s not the first high-quality collectible in this price range to have ever existed. I make no judgement on whether you should or should not buy it — you live your best DeLorean prop-replica-buying life. You’ll just be doing it with significantly less money.

But if you want to keep it ’80s with movie toys that are a little more user-friendly in budget, you’ve got to check out the new official TRON action figures from Diamond Select Toys. These were announced earlier this year, but now preorders have officially opened on Diamond Select Toys’ three-pack of TRON action figures. Each 7-inch scale action figure is based on the look of a character from the 1982 film: Tron, Sark, and Infiltrator Flynn in his red infiltration disguise. You can preorder all three of them together from BigBadToyStore for $74.99.

Let’s keep the movie toys all cool and chronological and glide into the ’90s. More specifically, right into a very specific scene from a very distinct ’90s movie.

While we are going to give the full breakdown of San Diego Comic Con toys and exclusives as various brands unveil them, we have to talk about NECA Toys’ amazing new four-pack from 1990’s Teenage Mutant Ninja Turtles. The pack is called “The Capture of Splinter” and point blank, it depicts the scene in which Shredder and his soldiers capture and semi-torture Splinter.

All four figures are 7” scale and the pack includes Splinter (with cloth robe), Shredder (with cloth cape), and two Foot soldiers, plus plenty of extras: manacles, a cardstock crate, and a weapons rack for storing all the Foot Clan accessories. Retail: $125, and remember, it’s a Comic Con Exclusive.

Ziplining the movie toys right into the present, there’s something you need to see… that unfortunately, none of us can have.

New from Hot Toys is a John Wick figure that’s significantly more affordable than its usual line of figures. Unfortunately, preorders are completely sold out. The John Wick figure from Hot Toys has an MSRP of $234.99 from Toy Origin. It is a little over 12” tall and features a highly detailed head sculpt, a finely tailored three-piece suit, multiple articulations, and an arsenal of weapon accessories including a variety of pistols, shotguns, and rifles. This figure also features a knife, John Wick’s signature pencil, two Blood Oath Markers, several gold coins, and a specially designed figure stand.

Are you ready for some Giant Robot News? We sure as doodles are because the world is going Robotech and Macross crazy!

First up from Toynami comes a new series of Robotech retro-style action figures. All your favorite Robotech characters are approximately 4.25″ tall, come fully articulated, and feature removable helmets and display stands! Series 2 assortment includes Captain Gloval, Lisa Hayes w/ Dress Uniform, Rick Hunter w/ Dress Uniform, Claudia Grant w/ Dress Uniform, and Ben Dixon w/ Space Suit. These figures have an MSRP of $14 and will be released Summer 2019. While Toynami isn’t selling them directly, you can check out its list of retailers to find the best place for you to snag your own!

Which Macross-Mech do you like better; the robot or the ship? Well, now you can have both!

Coming in August 2019 from Wave with an MSRP of $29.29 are two sets of amazing Battroids and Fighter ships from the Macross series. They are 1/100 scale (littles) and gauging from the images, each kit has the capacity to build three robots or three ships, depending on which one you purchase. And if you buy both, they can all combine to form a Valkyrie! You can snag the Battroid kit here from HobbyLink Japan, and the Fighter Multiplex kit here.

From Robotech to Voltron, Bandai has another amazing reveal in the works. From the same Soul of Chogokin line comes a DX Dairugger XV figure. The long and short, this mecha is known in the U.S. as “Vehicle Voltron” because when Dairugger was brought over to the U.S., it was cut and spliced into another season of Voltron, even though it had nothing to do with the Lion Voltron series that fans loved. Still, we’re predicting that when this figure is distributed in the U.S., some familiar Voltron lion logos will be slapped onto the side, keeping it in the Voltron family. The figure will cost about $340 and will be released in October 2019.

We’re all out of bots for now, but we have plenty of toy news in the land of superheroes. And what better Superhero to kick off with than everyone’s favorite buff, semi-naked hero franchise, Masters of the Universe.

Coming soon from Mega Construx, a subsidiary of Mattel, is the Battle Bones brick set. Mega Construx previously released a Wind Raider set, which has an MSRP of $19.99 and is available at Walmart. On its way next month will be the 3,000+ piece Castle Grayskull Mega Construx set. It comes with a few mini figures (including the first appearance of Moss Man in this format) and an air freshener! See? Superhero toys don’t always have to mean Marvel and DC toys! That said…

Are you ready for some Marvel toys?

Coming soon from Hasbro is a Marvel Legends Avengers: Endgame Captain America. This Walmart exclusive is 6 inches tall and has an MSRP of $19.99. It will be showing up in stores in the next six weeks and comes with a little surprise inside the box: This Captain America comes wielding Mjølnir!

We’ve reached the end, my toy loving friends, and we’re going to leave on a high note. And by high, I mean fancy and premium. It’s another Hot Toys figure, and this time it’s the delightful Pepper Potts 1:6 figure in her Rescue Suit. This item has an MSRP of $399.99 and can be preordered today from Toy Origin. A shipping date is not yet available. It is just over 12″ tall and features a huge number of accessories in the box. It has an expected ship date of 1st quarter 2021. So yes, my fellow impatient collectors, it will take a few minutes before you have this one in your possession. Hear that, bank account? You’ve been spared… this time.