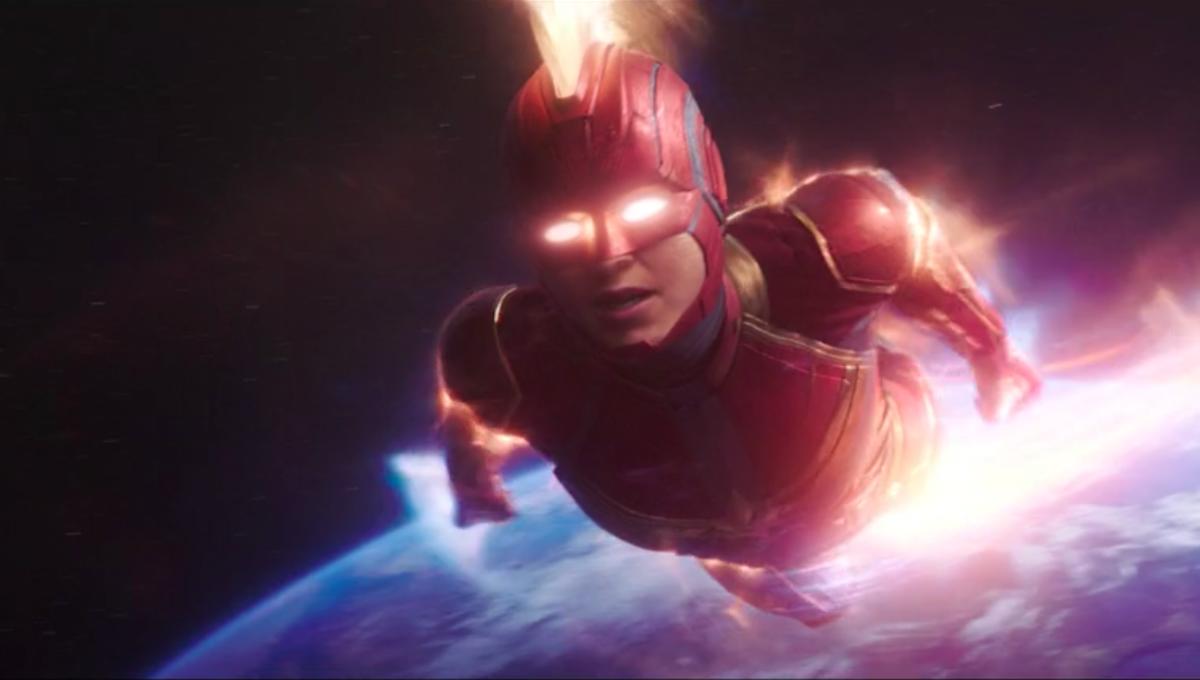 Carol Danvers (Brie Larson) took a full-on headbutt from Thanos (Josh Brolin) in Avengers: Endgame and didn’t feel a damn thing! It’s time for all of us to celebrate the great Vers, er, Captain Marvel.

Carol’s standalone movie is now available to purchase and download on digital platforms, and we were fortunate enough to get our hands on a copy with all the bonus goodies it contains. Packed with featurettes, a gag reel, deleted scenes, and a humdinger of a directors’ commentary, the home release of Captain Marvel is pretty much a must-have for fans of the MCU.

As one would do with a dead Skrull, we dissected all the special features contained with the film copy and chose the juiciest, most interesting bits and factoids, which might just blow your flerken mind. Check out what we learned below…

There’s no denying that the real breakout star of Captain Marvel was Goose, Mar-Vell’s ginger cat, who is actually a Flerken, a feline-adjacent species of aliens who house slimy tentacles and pocket dimensions inside their cute and furry bodies. Don’t worry, though. The gag reel reveals that for the more intensive scenes, a stuffed version of Goose was used, so that the real cats would not be harmed in the slightest.

“When we were working on the first outline for this movie and we shared it with Kevin Feige, his first note was, ‘We need 200 percent more Goose,” says Anna Boden — who co-wrote and co-directed the project with Ryan Fleck — on the featurette entitled “Hiss-sterical Cat-titude.”

Not only does Goose prove useful in the hiding the Tesseract from Yon-Rogg and the other members of Starforce, he’s also responsible for clawing out Nick Fury’s eye, which leads to the character (Samuel L. Jackson) donning his iconic eye patch.

Going back to the comics:

Since the shapeshifting Skrulls are the “bad guys” for a good chunk of the film, the directors read a bunch of Marvel Comics in order to get inspiration for their script and shot compositions. One of the most influential storylines that they came across was Secret Invasion, a limited 2008 crossover event from writer Brian Michael Bendis and artist Leinil Francis Yu, which explored Skrulls trying to take over the planet. In fact, the scene where S.H.I.E.L.D. is dissecting a dead Skrull (around the 36-minute mark), is ripped straight from the pages of Issue #1.

“Early on in the process, it was just reading a lot of comics and pulling images and throwing up ideas on a whiteboard of ‘What are the things that we really wanna see in this movie?’ And that was one of those images,” says Boden on the commentary track.

As it is with modern filmmakers, Boden and Fleck couldn’t help but pay homage to some of their favorite movies and directors from years gone by. Let’s see how many you picked up on…

For example, the flashback to young Carol riding a go-kart at a carnival (at 14:53) was meant to look like a 16mm film from the 1970s. To really achieve that grainy visual style, the visual effects team was given a clip from Gimme Shelter, the 1970 documentary about the Rolling Stones.

That “mind fracking” sequence (as the directors dubbed it) was also influenced by Eternal Sunshine of the Spotless Mind, a 2004 science fiction movie about a company that can go into your head and erase certain memories.

“The idea of these voices outside that are kind of commenting on the memories and those bleeding in. The surreal vibe was really an inspiration,” says Boden in the commentary.

Another nod to the groovy ’70s comes during the scene where Carol chases a Skrull onto the train of Los Angeles’s subway system (29:39). This entire sequence was inspired by the iconic train chase in 1971 crime film, The French Connection. Of course, the sci-fi twist is that where Popeye Doyle (Gene Hackman) could successfully seek out his target on the train, Carol’s mark can turn into anyone, thus making the job a lot harder.

During the climactic dog fight in the Californian canyons between Maria Rambeau (Lashanna Lynch) and Minn-Erva (Gemma Chan) (1:39:39), Boden and Fleck wanted to evoke memories of Star Wars. They don’t specify which part of that film, but one can probably assume that they’re referencing the part in A New Hope where Luke Skywalker (Mark Hamill) heads into the canyons of the Death Star to blow it up.

“I’m not ashamed to say I’m a big Star Wars fan,” Fleck says. “And if that movie has inspired this sequence a little bit [so be it].”

Moreover, Maria’s aerial prowess was meant to give the character her shining hero moment while acting as a commentary on how women weren’t allowed to fly fighter jets in the U.S. Air Force during the 1980s.

The Conversation (also a movie that stars Gene Hackman) is alluded to in the shot where Carol enters Pancho’s bar (38:21). As the camera pans around the bar, we’re meant to think we’re surveying the place from her POV until she reappears in the frame in a different spot, showing that she’s actually moved.

Oh, and that shot of Talos (Ben Mendelsohn) drinking a soda is not a reference to Jules  (Jackson) in Pulp Fiction, but to Mr. Blonde (Michael Madsen) in Reservoir Dogs, so the Quentin Tarantino comparisons weren’t that far off.

Carol Danvers may not have received her own movie until 2019, but her journey to the big screen began on the set of Avengers: Infinity War, which was shot back-to-back with Avengers: Endgame. In the featurette entitled “Becoming a Super Hero,” Marvel Studios president Kevin Feige reveals that Brie Larson’s first full costume fitting was on the set of Infinity War.

“Seeing that character that we’ve been working on for years, standing in front of you for the first time in real life, it’s incredible,” he says.

Since Captain Marvel is a prequel to the MCU, it takes place in the mid-1990s. As a result, there are plenty of nostalgic callbacks to that era, whether it be the needle drops or whole recreations of Blockbuster Video, the once-dominant video-renting establishment in the epoch before Netflix was invented. The ’90s-era sets were particularly personal for Fleck who says the following on the commentary track:

“This was such a fun set to shoot in. It was really like a time machine. I worked in a Blockbuster in 1995, I will admit … and this was just an amazing recreation of that. Walking around, looking at the shelves, picking up the VHS boxes … it was so fun.”

Captain Marvel is now available to buy on digital platforms like iTunes and Movies Anywhere. The DVD and Blu-Ray of the film go on sale Tuesday, June 11.

Video of How Captain Marvel Changed Everything | SYFY WIRE

The 5 Best and 5 Worst Godzilla Designs

Chosen One of the Day: Cherry Bomb from Howard the Duck