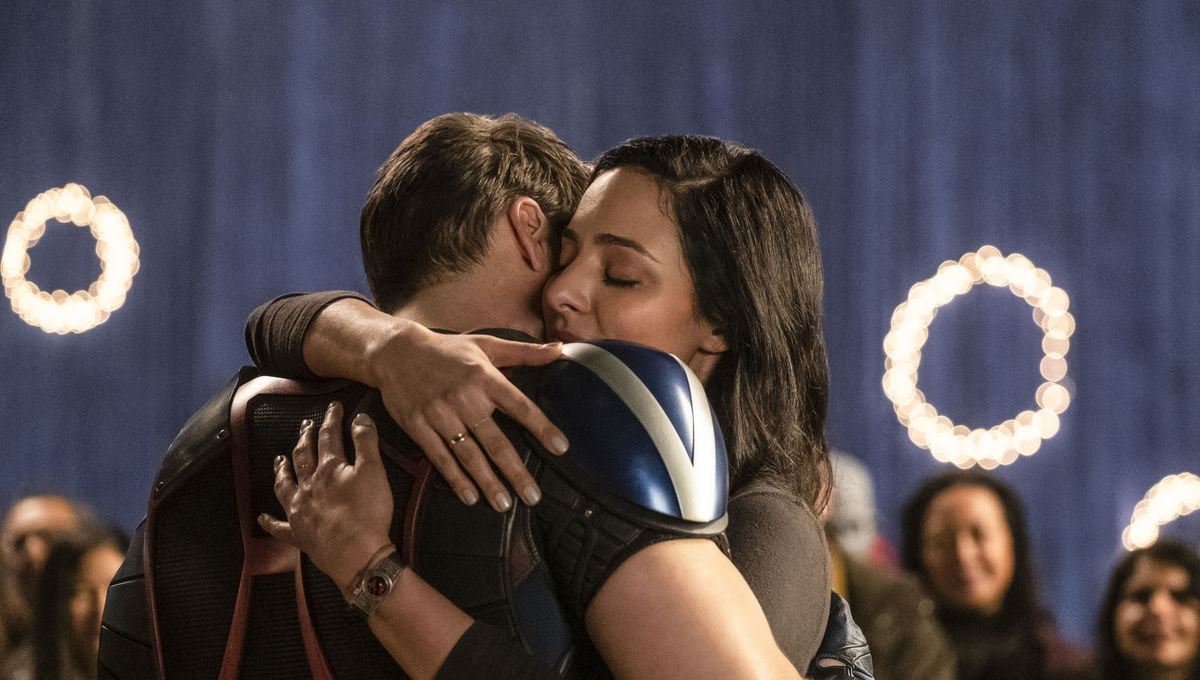 We might not have gotten a kaiju-sized battle between a stuffed animal and a demon this season, but the latest finale for Legends of Tomorrow still packed its fair share of weird punches.

Spoilers ahead for “Hey World!,” the season finale of The CW’s Legends of Tomorrow, which aired Monday, May 20, 2019.

In classic Legends fashion, the team comes up with the wildest and most hilariously earnest plan to stop Neron’s quest to turn the Earth fearful of magical creatures — they use a magical McGuffin to finish Nate’s dad’s magical theme park to serve as a tool to show the world these creatures are nothing to fear. We finally learn Neron’s mission wasn’t just to gain enough juice to take over hell — he wanted to open a door to create a literal hell on Earth, setting himself up as the king of a new hellish kingdom on the surface.

We get to see Nora — still rocking her fairy godmother gear — head to hell on a rescue mission to find Constantine and Ray’s soul (stored in a coin, since Neron has his body). Constantine even gets to team up with the adult version of Astra, who it seems will play a major role setting up next season of Legends (more on that later, though).

Oh, and there’s also a dragon. Not to be outdone by Game of Thrones, Legends turned out a full scale dragon attack on its minuscule CGI budget (which is probably closer to the catering bill for those coffee cups and bottles of water we keep spotting on Thrones). All things considered, it’s a romp — and doesn’t look half bad on a CW budget in that silly way that’s always made this show run.

But, as has become true to form — there’s still some bitter truth and darkness amidst all those silly adventures. The theme park plan doesn’t really work, so Nate sacrifices himself to be killed by Neron to break his deal with Ray, thus freeing Ray from possession. It works, and Constantine kills Neron once and for all, but Nate’s body is left lifeless on the floor once the battle is won. We then cut to Nate’s spirit, sitting in the rafters alongside his recently departed father, finally getting the goodbye they were denied. It’s a touching moment, and of course, Nate’s not really gone.

Neron and the Evil Godmother had channeled so much power through fear, they start a sing-a-long to try and channel enough literal love power to bring Nate back to life. It’s cheesy as hell, and sillier than that, but it just works so well. It goes back to a moment earlier in the episode, where the team dresses as “The Trinity” (Flash, Green Arrow and Supergirl) to promote their magical creature park in a commercial. Sara notes you have to use those A-list heroes to get them through the door, but after that is when you hook them. Which has been the Legends formula from Day 1.

This is a show that lives on the ridiculous, silly and deliciously fun corners of the Arrowverse. This is the show where nipples from hell turn evil, and even when the multiversal being The Monitor shows up (in a bit of set-up for next season’s Crisis on Infinite Earths), he just literally grabs a bag of popcorn and enjoys the show. It was amazing this show ever made it to air, and even more amazing that it’s still going strong. Here’s to many, many more adventures.

The big baddie was defeated, but we still have plenty of cliffhangers to muse over — most notably the case of the disappearing Zari. When Nate was killed, she left the time stream to come and try to help — thus opening herself up to be affected by the changing timeline, which saved her family and averted the apocalyptic future she came from. With her family now safe, Zari’s brother never dies, meaning she never takes the power totem from him. Meaning she’s no longer a Legend, and has been replaced in the timeline by her brother, a fact no one on the team actually remembers now. Oops.

Back to the set-up for next season, it looks like the show will continue to dabble in magic alongside all its other time travel and sci-fi shenanigans. Astra cashes in a pile of soul tokens for some of the scariest serial killers and bad folks in all of history, which hints next season could be all about tracking down all those killers and putting them back in the pit. It also stands to reason Constantine should be sticking around in the ensemble, since he’s right in the thick of Astra’s story.

This is the kind of show where a minotaur plays the guitar, and I am there for it.

Up next: A long, hot summer. Legends isn’t back until midseason, but they will return in the Crisis event in December. See you then.

Video of DC’s Legends of Tomorrow | Inside: Hey, World! | The CW

Unearth the untold tale of Angelus in first look at Boom! Studios’ Angel #2