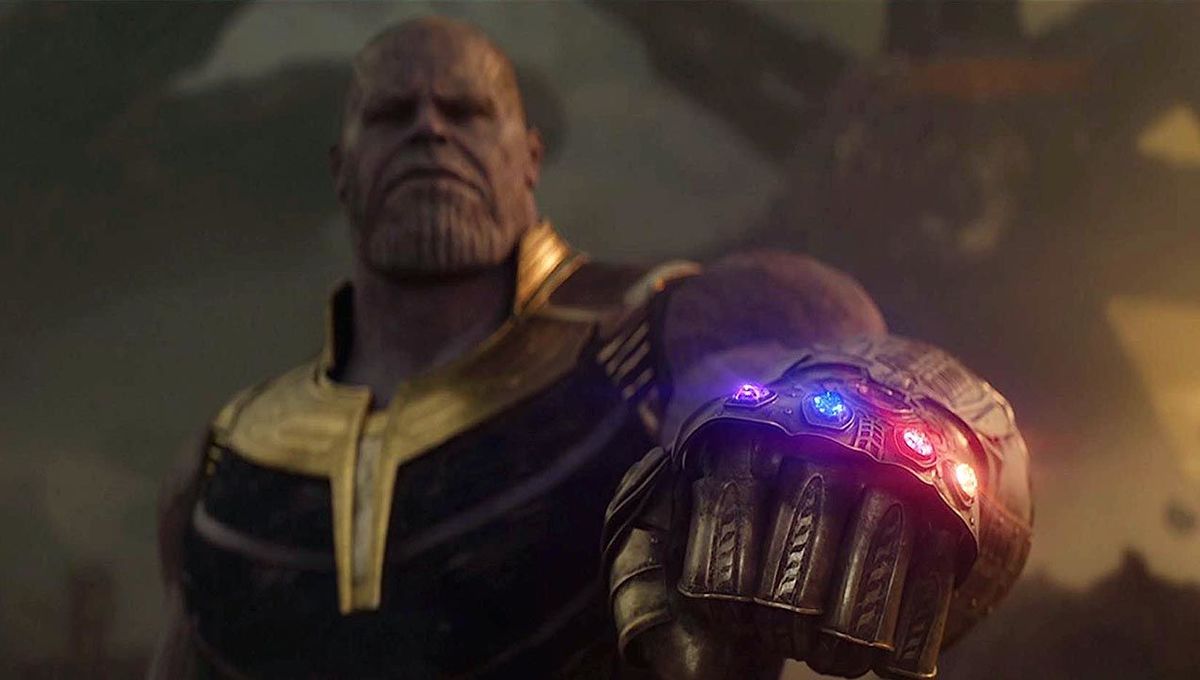 Welcome back to Important Toy News, the SYFY WIRE column that brings you all of the latest and greatest in toy culture. Learn what’s out there in the toy and collecting world, (spoiler, it’s giant monsters and Nano Gauntlets this week) and see how fast you can go broke making those shelves full of snarling kaiju and Avengers goodness.

We have a lot to cover this week, so let’s do a flying leap off that toy skyscraper!

Speaking of King Kong and jumbo monster creatures, there are two awesome new figures on their way. First up, we have Mezco Toyz showing off its new King Kong of Skull Island Ultimate figure. This guy is 18 inches of fun, has 10 points of articulation, comes with three snarling heads, and four hands.

Next up in super scary giant monsters comes a stunning reveal from Bandai.

Coming to its S.H. MonsterArts line is a killer-good Godzilla figure from his depiction in the upcoming Godzilla: King of the Monsters film. This beauty will be released in July 2019 and has an MSRP of $56 dollars. You can find the big boy now for preorder on HobbyLink Japan and other retail sites. Sculpted by monster-master Yuji Sakai, this figure of Godzilla is one hefty handful of powerful kaiju! (Blue fire effect most definitely included).

All right, this toy might qualify as a spoiler. But you know the pop culture rule; you have two weeks. Meaning that if you haven’t seen a big movie or television show in the first two weeks of its release, then the safety bumpers are taken off that figurative bowling alley, and you’re left trying not to throw your ball into the gutter of spoilers.

And spoilers indeed! Hot Toys isn’t waiting for you to catch up on anything! Coming soon is this life-sized 1:1 scale Nano Gauntlet. You can preorder this beauty for $369.99 from Toy Origin today. There is no shipping date available as of this writing. It is 52cm and comes in that stunning metallic crimson paint, which, knowing Hot Toys, is screen-accurate and gorgeous.

The first is a smaller, 1:4 scale statue on a stand. There is a 19cm traditional version, as well, which will be a Sideshow Collectibles exclusive. The other is a 22cm Hulk Edition, which is the big beefy version of this 1:4 scale collectible piece, adorned with gems for that Sonic Chaos Emeralds effect. It has an MSRP of $141 and you can preorder one today.

Can’t afford a premium Nano Gauntlet? Worry you not! Hasbro has you covered.

Coming directly from Hasbro is a $99 cosplay-style wearable Gauntlet for you to shove your fist right into. It will be released in Fall 2019, and is available for preorder now. It also features highly articulated electronic finger joints, pulsating light effects, movie-inspired sounds, and a fierce-looking fist lock display mode.

Moving away from Nano Gauntlets, though sticking with the Avengers, we have a new wave of Avengers: Endgame action figures coming from the Marvel Legends line.

In Marvel Legends tradition, they are 6 inches tall and have an MSRP of $19.99. These are actually part of the Build-a-Figure line (as many Marvel Legends are), and with this wave, you can build a Hulk if you collect all the figures. Included in this line are War Machine, Beta Ray Bill, Union Jack, Rock Python, Shuri, Rescue, and Loki. They are set to come out in July 2019 and can be ordered online or found on retail shelves.

From reasonably priced, right back to premium, we’re going to check out another breathtaking reveal from Hot Toys.

Using this perfectly sculpted Tony Stark head and pushing it to its limits, Hot Toys is releasing a Team Suit Edition of Tony Stark. I love this costume so much — it’s really the Macross of Avengers in terms of outfits. While there is no shipping date available yet, this 1:6 scale Team Suit Edition Tony Stark has an MSRP of $229.99 and can be preordered from Toy Origin today.

Does it ever feel like there’s a new Spider-Man action figure announced every week? Well, good news; this week it’s two. And today, I’m going to share these tasty new pieces with you.

First up from Hasbro in its Marvel Legends line is a Marvel 80th Anniversary “Big Time Spider-Man” figure. This super cool looking black and green beauty is 6 inches and has an MSRP of about $19-$22, depending on where you look. While a version of this toy was made once before around 2015, fans agreed it was time for a do-over using current Marvel Legends sensibilities. It will ship out in October 2019.

And lastly, we’re heading over to Japan to get our hands on a new figure from Medicom Toy in its Mafex Collection. It’s a 5.7-inch Spider-Man, from his depiction in 2017’s Spider-Man: Homecoming. This lovely piece will be released into the wild in January 2020.

Did that put the super in superhero toys, or what? I don’t know about you, but I’m (always) ready for some Giant Robot News!

It’s a blast from the past with Toyfinity’s revival of the ’80s toy line Robo Force! Toyfinity is releasing new Robo Force figures. All parts are Gylos compatible; this means you can use them with other Gylos lines like Onell design or Godbeast, not to mention so many more. The Robo Force toys range from $24-$38 and are available for purchase today. The line offers Maxx Zero, Nazgar the Tyrant, Zetonian, and M. Zeroid.

Transformers lovers, the wait is (hopefully) almost over. Earlier this year, there was an announcement that Walmart was reissuing a G1 Soundwave from Transformers figure. We saw the Hot Rod, Starscream, and now Optimus Prime hanging out on the shelves. But now, the internet is holding its breath for Soundwave.

As I first reported on Toy Wizards, there is very little information about this amazing piece. But we know that we want it. Word around the playground is that it will be available in the second quarter (which means more or less between now and June) and hopefully will match Optimus Prime’s $50 price point. Which is totally an amount I’m willing to pay for Soundwave because Soundwave superior, Constructicons inferior, am I right?

We’re nearing the end, my toy loving friends, and this wouldn’t be an issue of Important Toy News without wrapping up with some television and movie toy news, right? Exactly!

Kicking off with the movies, we have another gorgeous piece from Mezco Toyz’s One:12 Collective. This time, it’s a Deluxe version of John Wick from the second film. This amazing looking little number will have an MSRP of $120. This might cost more than the last few One:12 Collective figures that Mezco showed off (the last few have been $80), but you’ll see by the sheer number of (gun) accessories included that this lovely collectible is well worth its cost. It is available for preorder now!

The set is available for LEGO VIPs for $199, with mass retail availability beginning June 1.

Originally announced at Toy Fair 2019 in February, Diamond Select Toys is teaming up with HBO to produce a wave of three action figures from the series Westworld. The flagship wave includes Delores with her groceries, the Man in Black with his maze scalp, and Dr. Ford with his dog. These figures stand 7 inches tall and you can preorder them now at BigBadToyStore. They have an MSRP of $74.99 (for the three) and will ship in August 2019.

Our final toy of the week delight of the day will take you back to a simpler time, a time when Game of Thrones was the best show on television.

Presenting, in lovely 1:6 scale, is King Joffrey Baratheon by ThreeZero. This amazing figure (and really, all of ThreeZero’s GoT figures are stellar) has an MSRP of $178 and is available for preorder now. It is expected to ship in the last quarter of 2019, and a deluxe edition is also available for $188. The deluxe edition comes with Joffrey’s sword “Widow’s Wail,” half of the two swords reforged from the melted down blade of Ned Stark’s greatsword “Ice.” The figure stands 11.5 inches tall and features the likeness of Joffrey Baratheon actor Jack Gleeson. He has an interchangeable hair with crown, intricately tailored cloth tunic, royal sash, black trousers, belt, boots, hip quiver, alternate hands (2 pairs open, 1 pair relaxed, and 1 set of fists), and comes with a crossbow and arrows.

You know… like the crossbow he raised up at the prostitutes. Man, remember when the terror wasn’t just magical, untouchable Euron and a meat sack dragon flamethrower? Yeah… ThreeZero remembers.

DC writers predict the 'next era of superheroes' at C2E2