The Samsung Galaxy Tab A 8.0 (aka Samsung Galaxy Tab A Plus P205) has currently been listed on the Samsung Thailand website, but there is no word on its pricing or regional availability. As per a report from XDA-Developers, it will be sold in Cambodia, Laos, Malaysia, New Zealand, Philippines, Singapore, Thailand, Vietnam, and the UK. Samsung is yet to reveal when the Galaxy Tab A 8.0 will hit the shelves, and whether it will make it to the Indian market.

The single-SIM LTE-supported Samsung Galaxy Tab A 8.0 comes equipped with an 8-inch WUXGA TFT (1920×1200 pixels) display which has support for S Pen input. The device comes with a one-tap blue light filter feature to activate the native low-light mode for reducing strain on the eyes. The Galaxy Tab A 8.0 also has a dedicated slot to house the S-Pen, which comes with IP68 rating for protection against dust and water.

The Samsung Thailand website lists the processor as an octa-core SoC clocked at 1.8GHz, but doesn’t specify the make of the processor. XDA-Developers claims that the processor in question –  citing firmware files – is the in-house Exynos 7904 and that the tablet runs Android 9 Pie. The octa-core SoC is paired with 3GB of RAM. In the imaging department, the Samsung Galaxy Tab A 8.0 packs an 8-megapixel rear camera and a 5-megapixel front camera, but details such as aperture value and pixel size are currently not available. The rear camera can record 4K videos at up to 30fps.

The new Samsung tablet has 32GB of inbuilt storage, which can further be expanded via a microSD card (up to 512GB). As mentioned above, the Galaxy Tab A 8.0 has support for 4G LTE connectivity. The rest of the connectivity suite is handled by Bluetooth LE 5.0, GPS, Glonass, Beidou, Galileo, Wi-Fi a/b/g/n/ac, Wi-Fi Direct, 3.5mm headphone jack, and a USB Type-C 2.0 port. The device comes equipped with a 4,200mAh battery but there is no support for fast charging. 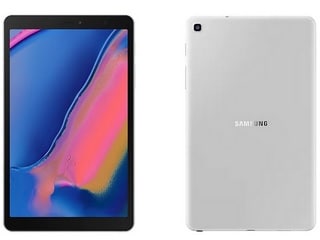