iOS 12.3 and tvOS 12.3 public beta versions have been released. A day after rolling out the iOS 12.3 beta for the developers, Apple has rolled out the first public beta version of the updated iOS and tvOS for the public. The iOS 12.3 and tvOS 12.3 public betas include updated Apple TV app, which includes the Apple TV Channels feature that was introduced at the company’s recent “It’s show time” event. If you have enrolled your Apple TV or iOS device for beta access, the public beta will automatically reach your phone, tablet, or Apple TV.

According to a report in 9to5Mac, the updated Apple TV app included in the public beta is already allowing the consumers to subscribe to Showtime, Starz, The Smithsonian Channel, and Tastemade channels. The list is expected to grow as the company releases newer beta version in the run-up to the release of the stable version. The final version of the Apple TV app will include access to TV channels like HBO, CBS All Access, EPIX, Noggin and new services like MTV Hits. The company has promised to add even more over time.

The 9to5Mac report also notes that the redesigned Apple TV app puts more focus on curation and the integration of the third-party services. Other specifics of the new public beta updates are unclear at this point.

If you want to try out the public beta updates, you can head over the Apple’s beta website to sign up and enrol your Apple device for beta software access. Apple recommends backing up your iOS device before installing the public beta. Apple TV doesn’t require a backup since all the purchases and data are stored in the cloud. After you have prepared your iPhone and iPad for beta installation, go to Settings > General > Software Updates and download the beta update. The Apple TV updates can be found at System > Software Updates. 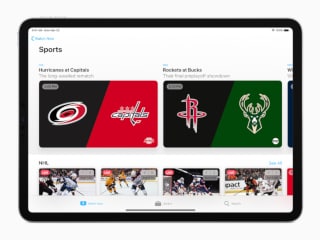