With a little over two months to release, Warner Bros. has released a new (final) trailer for Godzilla: King of the Monsters — set to an epic orchestral cover of “Somewhere Over the Rainbow” — which includes tons of new glimpses of the multiple giant-sized monsters that are part of the film: the pterosaur Rodan, the three-headed Ghidorah, and the moth/butterfly-like Mothra. The trailer makes sure to introduce them in the beginning, before they start to wreak havoc on our planet.

“Our planet will perish, and so will we, unless we set Godzilla free,” Dr. Emma Russell (Vera Farmiga, from Bates Motel) says in the new trailer. Her husband, Dr. Mark Russell (Kyle Chandler, from Bloodline), then adds in a different scene: “This time, we join him.” All this while the new Godzilla: King of the Monsters trailer shows us footage of humanity struggling to keep the giants at bay with their gunpowder weapons.

Instead of keeping it a surprise for the film, Godzilla has been branded as mankind’s only saviour from the start of the film’s marketing. The new trailer doubles down on that, as every human character — including Dr. Stanton (Bradley Whitford, from The West Wing) and special military forces leader Barnes (O’Shea Jackson Jr., from Straight Outta Compton) — verbally acknowledges their partnership with the Japanese metaphor for nuclear weapons.

Godzilla: King of the Monsters will release May 31, 2019 worldwide. It’s part of Warner Bros. and Legendary Pictures’ so-called MonsterVerse, which includes the 2014 Godzilla reboot and the 2017 Vietnam War-era King Kong-reboot Kong: Skull Island, starring Tom Hiddleston, Samuel L. Jackson, Brie Larson, and John Goodman. The two monsters will line up in Godzilla vs. Kong in March 2020, from director Adam Wingard (You’re Next). 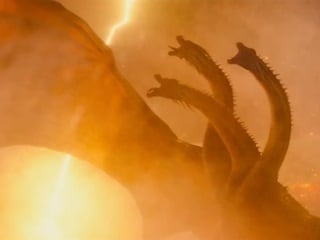 WATCH: Snap Judgement on who's the best Batman