Unveiled at the Unpacked event in February, Samsung Galaxy Fold is all set to hit the shelves in April. Ahead of its sale, Samsung has released a video showing off the tests carried out on the Galaxy Fold to ascertain durability. The video shows Samsung conducting a folding test, and the company claims that the phone is capable of withstanding 200,000 folds. That equals to over five years of usage, if you unfold the phone up to 100 times a day. Separately, an early Galaxy Fold user has shared his first impressions, giving us brand new information of the phone. He reveals that the display crease is hardly noticeable, the battery life is good, and that the hinge is quite sturdy.

Starting with the folding test, the Galaxy Fold new video shows Samsung doing a rigorous folding test on the phone to assess its durability. Samsung says that the Galaxy Fold can outlast 200,000 folds and unfolds (or around five years of use, if used 100 times a day). Samsung claims that it took a full week for the company to complete the test, but thought it vital to ensuring the durability of device’s hinged design and Infinity Flex Display. The video, unfortunately doesn’t detail the display crease that has been reported by some users, nor does it detail on what can happen after the 200,000 folds are over. In any case, you can watch the video below:

Separately, XDA Developers’ Mishaal Rahman has sourced a slew of information from an early Galaxy Fold user, revealing some never-before-heard information about the phone. While the Galaxy Fold has already been unveiled, with key specifications known, the company is yet to reveal all details on usability, app performance, and more. The owner suggests that the display crease is visible and appears when unfolded. However, the owner says that it’s difficult to notice it when the brightness is set to more than 70 percent.

The Galaxy Fold user lauds the hinge, and says that it is sturdy enough and doesn’t bend the phone the wrong way, accidentally causing it to break. He says that you cannot use it as a tiny laptop by keeping the phone open at a right angle, as the display remains switched off when the internal display is half-opened.

The owner also said that the smartphone scored better than the Galaxy S10+ in AndroBench’s sequential read/write tests but scored slightly lower in random read/write tests. He said that switching apps between displays caused delay, but games ran fine on the Galaxy Fold. Rahman’s source said Chrome couldn’t re-render pages on the full screen when switching. However, he said that the delay was not seen on the Brave browser, and was only spotted in Chrome, so it may be an issue with the early versions of Chrome.

Rahman notes that the Galaxy Fold shuts like a binder, leaving a small gap. It allows for separate home screen setups, and the owner lauds the battery life as well. 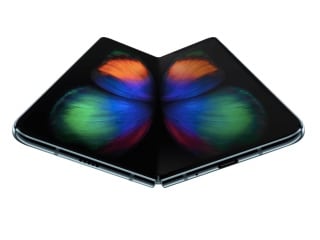