Mortal Kombat hasn’t always had smooth sailing as a franchise. However the past two instalments — Mortal Kombat 9 and Mortal Kombat X — were solid additions to the series and the next entry, Mortal Kombat 11, appears to build on the formula of those two games in meaningful ways, if our time with the Mortal Kombat 11 beta for PS4 and Xbox One is any indication. If you’ve pre-ordered Mortal Kombat 11 on the PlayStation 4 or the Xbox One then by now you too would have access to the game’s beta that will go on all the way till Monday, April 1. But if you’ve been holding off, we’ll tell you all the important bits that you need to know before you make your buying decision.

The beta offers just five fighters — Scorpion, Baraka, Kabal, Jade, and Skarlet. It may seem very limited at first, but you peel off the layers as you play to reveal a lot more. Each fighter comes with three preset fighting styles, each with its own additional special moves. For example, Scorpion’s Boon’s Main preset gives him the Demon Slam aerial move, while the Chain Reaction preset adds higher control over his signature spear. Like in Mortal Kombat X, you can press the R1 on PS4 controller or the RB on Xbox One to modify the hit for higher damage.

Character customisation options are now more than ever.

But the most interesting change in the new game comes in the form of character customisations. What we had seen in the initial teasers were cosmetic customisation options, but actually you can even make changes in your customised character’s entrance, wining poses, and most importantly, special moves. You have three special move slots for each character, where you can either add three moves out of a very generous roster provided to you, or go a step further and add a high-damage move that takes multiple slots instead. This opens up your character to play to your strengths.

For example, if you prefer a more aerial fighting style, then you can add more moves that can be done mid-air. Or if you prefer juggling combos, then add a heavy stun attack that will give you the opening you need. What you can do here is pretty impressive and we’re sure players will spend hours customising their characters when the full game releases.

The fighting style will immediately feel familiar if you’ve played Mortal Kombat X or even Injustice 2 for that matter. Characters have a fluidity that lets you implement combos and special moves with ease, but there’s also a sense of heft that doesn’t make it feel over the top or cartoony like in Marvel vs Capcom or Killer Instinct.

There are some little additions done to pepper up the fighting. Like in the PS4 version, the game uses the controller’s speaker to make a splatter sound when you get a first hit in a match. High-damage X-Ray moves that have been a series staple since Mortal Kombat 9 make a return, showing off the carnage up close and personal, internal organs and all, complete with slow motion. They’re called Fatal Blows here and they’re grand, bloody spectacles lasting multiple attacks and combos and can only be done once in a match, when your fighter’s health is in its final quarter. This adds more balance in the gameplay and also eliminates the strategy of taking a few hits on your character, just so you can pull off this high-damage manoeuvre.

That’s not to say Mortal Kombat 11 reserves its affinity for gore to these moments, certain special moves get the X-Ray treatment too. Though these appear to be activated at random.

Speaking of which, we have to mention that there’s a little change in Scorpion’s signature spear throw special move where after he impales and pulls the opponent close, there’s an immediate auto-slash at the end. We highly prefer the previous iterations where the opponent would be stunned after the spear throw attack, which would give us time to execute an unblockable combo.

‘Picking your brain’ has a literal interpretation in Mortal Kombat 11

Thankfully, the Fatality mechanic has been left unchanged. You still get a generous 10 seconds for you to implement your Fatality combo, so you have time to fit two to three tries in case you don’t get it right the first time.

It’s not a Mortal Kombat game without the over-the-top blood, guts, and gore and if you have been following up on Mortal Kombat 11 at all, you know that this one is reaching new levels on all three.

Every hit comes with its share of blood splatter that drops and stays on the arena all through the fight. X-ray moves are a lot more detailed this time and the bone breakage looks all the more real thanks to the more accurate colours, and the surrounding guts, to add to the effect.

Fatalities are clearly not for the squeamish this time, since the game seems to have moved a bit towards realistic gore than the cartoony violence it had going for it earlier. Mortal Kombat seems to push the boundaries of video game violence with every iteration and it will be interesting to see how far this will go.

Brutalities are a lot easier to implement this time

Brutalities form a mini-fatality of sort, in case you still want the gory finish, without doing a whole show around it. Like we mentioned earlier, they’re a lot simpler to implement than ever before, and it’s a great change for people who are new to the franchise.

Mortal Kombat 11 PS4 vs Xbox One

We tried the Mortal Kombat 11 combo on both the PS4 Pro and the Xbox One X on a 4K TV and both looked pretty much identical. We didn’t do any formal resolution tests or count the pixels on screen, but when the game is in motion, we were truly hard pressed to tell any visual difference between the two consoles. More importantly, the game appears to run at a smooth at 60fps on both platforms with no slowdowns or hiccups in frame rates at all.

We tried online multiplayer on both consoles and after the initial 20 to 30 seconds to connect, it was pretty smooth all through. There’s a ping indicator too and while it only had us at two points of ping rather than the optimal three, there was absolutely no noticeable lag on our 50Mbps Internet connection.

The big differentiator between the two consoles would be the controller. We’re a lot more comfortable using the DualShock 4’s directional pad with a fighting game like Mortal Kombat, instead of the stiffer pad on the Xbox One controller. If you use analog sticks (and you’re truly gifted if you can implement precision moves with that), then either platform would work equally well for you.

With Mortal Kombat 11, we’re seeing an intriguing evolution in gameplay, stemming from past entries as well as developer NetherRealm’s other series, Injustice. It will be interesting to see how this plays out over the course of the full game when it’s out.

Stay tuned for our full review when the full game releases on PS4 and Xbox One on April 23, priced at Rs. 3,499. The Nintendo Switch version is set to launch on May 17 at the same price. 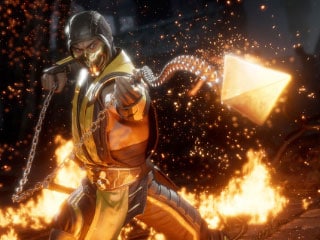