Apple has once again been accused of not following its own App Store guidelines. After being criticised for using notifications to send out promotional messages for Apple Music, the new offender is the Apple News app, which does not display pricing information and subscription-related disclosures in the same way that Apple demands third-party developers do. Apple’s App Store guidelines exist to give users consistent and understandable information, and minimise the chances that unscrupulous developers will be able to trick users into auto-renewing subscriptions that they don’t need. Apple has been known to reject apps and updates for very minor omissions or deviations from its published rules.

Apple unveiled its Apple News+ subscription service at a high-profile event earlier this week, along with its Apple TV+, Apple Card, and Apple Arcade subscription services. Apple News+ is now available to users in the USA and Canada with the iOS 12.2 update, and will expand to other countries, though India is not on the list yet. The subscription costs $9.99 (approximately Rs. 701) per month in the USA after a 30-day free trial, and gives readers access to hundreds of magazines and some premium content from newspapers.

One user who checked out the service, iOS developer Dave DeLong, posted screenshots of the subscription sign-up page on Twitter, noting that it does not link to a privacy policy or contain information on how to cancel a subscription, both of which are required by Apple’s guidelines.

Hey @apple, your auto-renewing subscription screen is in violation of guideline 3.1.2 and your app should be rejected.

For starters… no links to privacy policy or support page; no info on how to cancel. pic.twitter.com/drvAZRZzqi

As per the rules, other things that need to be clearly disclosed to users when signing up for an automatically renewing subscription include exact details of what the user gains by subscribing, the duration of each subscription period, how and when payments are charged, and how users can manage or cancel their subscriptions.

Some Twitter users have pointed out that Apple News is not a third-party app and is not distributed through the App Store, which might exempt it from these rules. Other responses in DeLong’s thread have expressed frustration with Apple not adhering to these rules even if it doesn’t have to. As The Verge points out, Apple has previously violated its own guidelines regarding push notifications to promote an Apple Music offer, its Carpool Karaoke series, and support for Amazon’s Echo devices.

Apple has also recently been accused of unfair, anticompetitive practices by Spotify, with the music streaming startup calling Apple “monopolist” and registering a complaint with the European Commission regarding its 30 percent cut of all App Store transactions. Spotify stated that Apple has at various times reserved Siri and Apple Watch compatibility to itself, rejected its app updates for allowing users to subscribe to its premium tier without an in-app purchase, changed app submission guidelines arbitrarily and inconsistently, and prevented it from advertising discounts and promotions. 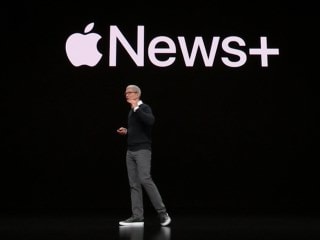