Most modern TVs put too much focus on the visuals while the audio performance often takes a back seat. As a result, the audio products such as speaker packages and soundbars are gaining traction among the consumers. Samsung offers range of soundbars that are designed for optimal use with its TVs, and the South Korean tech giant has just launched its latest Q Series soundbars that are optimised for QLED TVs. The Samsung HW-Q70R and HW-Q60R soundbars are the first in the Q Series lineup, and feature the company’s Acoustic Beam technology, as well as a new feature called Adaptive Sound.

The new soundbars have been developed in collaboration and with certification from Harman Kardon, which is a subsidiary of Samsung. The Adaptive Sound feature is said to help the two new soundbars analyse content played on the viewer’s TV and adjust the sound settings for ideal audio performance. When used with the Samsung range of QLED TVs with the AI mode on, the soundbars will automatically switch to adaptive sound mode. This is useful, since it will supposedly help adjust the equaliser and volume settings properly and ensure that users don’t need to keep adjusting the sound from scene to scene.

The new Samsung HW-Q70R and HW-Q60R soundbars also use Acoustic Beam technology, which is said to improve the soundstage through proper positioning and throw of the sound. Additionally, the soundbars feature Bluetooth connectivity, which will add to the convenience factor for the users. The higher-end HW-Q70R soundbar is additionally equipped with Dolby Atmos and DTS:X Immersive technology, which will appeal to a lot of users seeking a better surround sound experience.

The new soundbars also feature a slim profile, with a height of just 59mm. This will make positioning a bit more convenient, particularly when placed on a table top in front of a TV. The new soundbars are slated to go on sale in April, but there’s no word on pricing and specific availability in India yet. To recall, Samsung recently launched its online-only NU6100 range of TVs in India, suggesting that the company is ready to take on the audio video space with more competitively priced models this year. 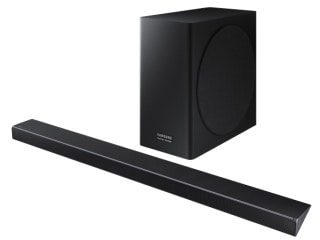 Mi A3, Mi A3 Lite Android One Smartphones Could Come With In-Display Fingerprint Sensors: Report