Lenovo Z6 Pro’s camera may be capable of producing 100-megapixel images, VP Chang Cheng has reportedly teased. Cheng has posted about the Z6 Pro using a Chinese hashtag which translates to a billion pixels, which in return calculates to 1000-megapixels. Of course, we’ve seen Chinese companies write numbers rather differently, and a popular Chinese tech publication claims it in fact means 100 million pixels. This comes weeks after Qualcomm announced that its processors already come with support for images with more than 100-megapixel resolution. Such a feature is possible if the phone is able to combine multiple shots of a single frame and make one large photo.

Cheng’s post on Weibo was spotted first by IT Home. While teasing the Lenovo Z6 Pro’s Hyper Video feature, he uses a hashtag that translates to “billion level pixels” in the post. IT Home claims the hashtag translates to 100 million pixels or 100-megapixels. This leads up to the speculation that the phone may produce large images, but of course, this is not the first time the company has talked about moving “beyond 100-megapixel” for the Z6 Pro, and we’ll have to wait and see that this translates to.
Though, with Cheng’s tendency to make exaggerated claims, this could just be another misleading caption from Cheng, and no such feature will be integrated into the Z6 Pro. Cheng has also posted another video teasing at the phone’s hyper video and super macro abilities. The video is posted on his Weibo account.

There’s little that is known about the Z6 Pro, when it comes to specifications. The Z6 Pro is expected to come with 5G support but it is speculated that a non-5G variant of the Z6 Pro soon after. Lenovo hasn’t mentioned any details with respect to the processor powering the smartphone. It could most likely be the Qualcomm Snapdragon 855 SoC, similar to the Lenovo Z5 Pro GT that was launched in December last year, and have up to 12GB of RAM and 512GB of storage.

The Lenovo Z6 Pro is set to be made available in June. An announcement was expected today, but right now, it looks like Cheng’s teaser is all we’re getting. 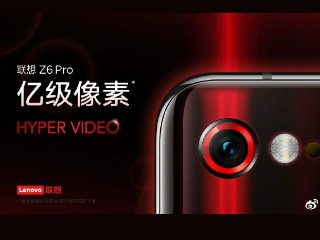