As anticipated, Huawei finally launched the P30 and P30 Pro at its Paris event. The two phones are powered by the latest HiSilicon Kirin 980 SoC, sport a waterdrop-shaped notch, and a 40-megapixel sensor at the back. The Huawei P30 Pro comes with an additional time-of-flight (ToF) camera as well. Apart from the additional sensor, there are a number of differences between the Huawei P30 and Huawei P30 Pro phones. We highlight the differences between the two phones below for better understanding.

Both the phones will go on sale in select markets in a Black colour option, and four new gradient finishes — Amber Sunrise, Aurora, Breathing Crystal, and Pearl White. The phones are listed on Amazon India as coming soon in India. The exact launch date is not known.

Possibly, the biggest difference is the cameras. Huawei has added a quad-camera setup on the P30 Pro, which houses a 40-megapixel primary camera with 1/1.7-inch Huawei SuperSpectrum Sensor and f/1.6 (27mm) lens, a 20-megapixel ultra-wide-angle secondary camera with an f/2.2 (16mm) lens, an 8-megapixel telephoto camera with an f/3.4 (125mm) lens, and a Time-of-Flight (TOF) camera. There is also dual OIS (optical image stabilisation). You also get Colour Temperature and Flicker sensor. The camera setup enables 5x optical, 10x hybrid, and 50x digital zoom.

The Huawei P30, on the other hand, is missing the ToF camera and instead has a 40-megapixel ultra wide-angle sensor along with an f/1.8 (27mm) lens. There is also a 16-megapixel ultra-wide-angle secondary camera with an f/2.2 (17mm) lens and an 8-megapixel sensor along with a telephoto lens (80mm) featuring an f/2.4 aperture. The Huawei P30 features a Laser Transmitter and Laser Receiver for an enhanced focus and an LED flash.

Coming to the similarities of the two phones, the Huawei P30 and P30 Pro run on Android 9 Pie with the company’s EMUI 9.1 on top. Packing dual-SIM and dual VoLTE connectivity, both P30 and P30 Pro sport almost bezel-less front with dewdrop notches. Huawei has included in-display fingerprint sensors on both smartphones, which are powered by the 7nm manufacturing process-based octa-core HiSilicon Kirin 980 SoC with Mali-G76 GPU. In addition to eight CPU cores, the Kirin 980 SoC also packs two neural processing units (NPUs) to help in machine learning tasks, including faster image recognition.

For selfies, the Huawei P30 and P30 Pro both feature a 32-megapixel front shooter with an f/2.0 lens. The phones also have AI HDR+ to optimise overexposed and backlit selfies. Both phones also support Huawei’s 40W super charge technology. Huawei says it has also added a graphene film cooling system to manage the heat on both smartphones. 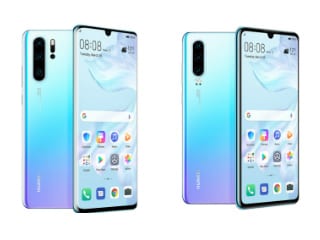