What does a rocket launch sound like? What did Neil Armstrong really say when he first stepped onto the surface of the Moon? The answers – and hours of riveting audio – are on NASA’s account at SoundCloud.com/NASA.

The space agency has uploaded hundreds of tracks and podcasts to the sound-sharing platform. The sounds are diverse, fascinating, frequently updated and free of charge.

You can browse individual tracks, but a good way to get started is by using playlists that collect related sounds, such as the ones put on the Golden Record.

The duplicate gold-plated copper disks went into space with Voyagers 1 and 2 in 1977. Collected by a committee chaired by cosmologist Carl Sagan, the records were designed to be listened to by any advanced alien civilization that might intercept them. You can tune in, too. They are thought-provoking time (and planet) capsules, which include greetings in different languages and various Earth sounds.

There are also playlists with sounds from the Juno, Apollo and space shuttle missions, among others, and podcasts that cover science, history, astronaut training and more.

The sounds are eclectic, informative and even creepy – as in the haunting radio emissions of Saturn and its moon, Enceladus, as captured during the “grand finale” run of NASA’s Cassini spacecraft, which was launched in October 1997. A “sound tour” of NASA’s Robotic Operations Center includes clicks, buzzes and clangs (and an expert explanation of each sound). And there are countdowns galore.

Most of the sounds are licensed under a Creative Commons license, which allows users to share and adapt as long as they give credit and use the pieces for noncommercial purposes. So put on your headphones, strap on your imaginary space helmet – and feel free to adapt, remix and share the sounds of space exploration. 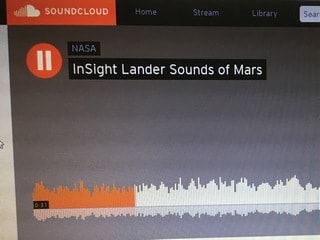 Tags: NASA, Out of this World, Playlist, Science, Space Music

Russia-US Venus Space Probe to Be Launched in 2027

The perils of upgrading a particle detector buried in Antarctic ice