Huawei P30, P30 launch event began at 2:00pm CET (6:30pm IST) in Paris with messages from various telecom executives from Europe, with each executive praising Huawei’s P-series of smartphones, followed by the entry of Richard Yu, CEO, Huawei Consumer Business Group, on the stage. Yu said that Huawei is building a better connected life with the use of artificial intelligence (AI).  Richard Yu then unveiled the new Huawei P30 and P30 smartphones. He said that the phones sport an exquisite design, which is inspired by nature. The P30 and P30 Pro pack small bezels with an ultra narrow notch, he added.

According to Yu, the new Huawei P30 and Huawei P30 Pro are lighter, yet pack bigger batteries than their predecessors. The phones also come with in-display fingerprint sensors and include a gradient back. Yu also revealed that the P30 Pro is IP68 rated and comes with water/ dust resistance. Both new Huawei smartphones will be offered in five colours, including Amber Sunrise, Breathing Crystal, and Aurora.

Richard Yu then talked about the imaging capabilities of the new P-series smartphones, which claim to bring the next generation camera experience.  According to Yu, Huawei has added a quad-camera setup on the P30 Pro, which houses a 40-megapixel primary camera with 1/1.7-inch Huawei SuperSpectrum Sensor and f/1.6 lens, a 20-megapixel ultra-wide-angle secondary camera with an f/2.2 lens, an 8-megapixel telephoto camera with an f/2.4 lens, and a Time-of-Flight (ToF) camera. Yu noted that the P30 Pro smartphone packs industry-leading light sensitivity with a maximum ISO rating of 409,600 and includes AI-powered HDR+ technology, whereas Huawei P30 supports a maximum ISO rating of 204,800.

Yu said that the cameras used in P30 Pro will allow for 5x optical zoom, 10x hybrid zoom, and 50x digital zoom. Huawei is now showing a demo of low-light photography on the P-series phones. After the demo, Richard Yu introduced the front camera capabilities of the two phones and he revealed that both phones feature a 32-megapixel front shooter with AI HDR+.  Richard Yu then moved on to the DxOMark scores of the new P-series smartphones, which the company claims ranked on top in pretty much all DxOMark tests. Yu then welcomed professional photographer Erik Madigan Heck to the stage to talk about the P30 Pro.

After completing the camera segment of the presentation, Richard Yu talked about the battery inside the two phones. According to Yu, Huawei P30 packs a 3,650mAh battery, whereas the Huawei P30 Pro includes a 4,200mAh battery. The P30 Pro supports wireless reverse charging, he added.

Yu then talked about the software preloaded in P30 and P30 Pro smartphones. Both phones run on Android Pie with EMUI 9.1.

In addition to the P30 smartphones, Huawei’s Yu also announced the Freelace and Freebuds Lite wireless headphones. The FreeLace wireless headphones come with with 4 hours playback from just a 5 minute charge, and up to 18 hours of playback on a single charge. Richard Yu also stated that Huawei Watch GT will now be offered in a new Titanium Grey color and introduced the new Watch GT Elegant and Watch GT Active. Huawei is also bringing a third-party watch face marketplace to enable third-party designs.

Yu then gave the stage to Hankook Kim, CEO of Gentle Monster, who talked about his company’s collaboration with Huawei to build the new ‘smart eyewear.’ Kim said we need to change our approach towards ‘smart eyewear.’ Huawei’s lineup of smart eyewear will be coming around July 2019.

Lastly, Richard Yu revealed the pricing of all new Huawei products. The Huawei P30 will be sold at EUR 799, whereas the P30 Pro will start EUR 999. The company’s Freelace and FreeBuds Lite wireless headphones will be offered at EUR 99 and EUR 119 respectively. The new Huawei Watch GT Elegant will retail at EUR 229 and the Watch GT Active will cost EUR 249. The 12,000mAh power bank has been priced at EUR 99. 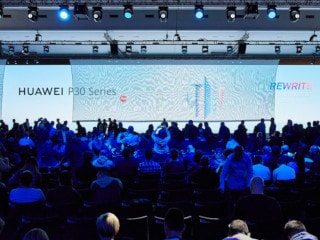