Apple launched a subscription news service Monday that includes more than 300 magazines as part of the iPhone maker’s pivot to services.

The Apple News+ service at a cost of $9.99 per month will include the Los Angeles Times and Wall Street Journal, digital news sites and magazine titles including Rolling Stone, Time, Wired and The New Yorker.

“We believe in the power of journalism and the impact it will have on our lives,” Apple chief executive Tim Cook said at the event in Cupertino, California.

“We think Apple News+ will be great for customers and great for publishers.”

Apple News+ was launched Monday in the US and Canada in English and French and will be available later this year in Britain and Australia, the company said.

The move comes as Apple shifts to emphasize digital content and other services to offset slumps in smartphone sales and with many news organizations struggling to monetize their online services.

Apple said advertisers would not be able to track the activity of subscribers to the new service, thereby ensuring greater privacy. 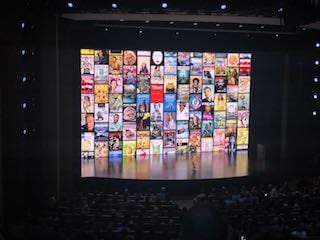