After the Samsung Galaxy A8+ (2018), the Samsung Galaxy A6+ users have reportedly started receiving the Android Pie update. The update is rolling out to users in Poland for now, but it soon should be available to users in other markets as well. The firmware version released in Poland is A605FNXXU3BSC6, and it brings along Android Pie on top of Samsung’s One UI. The update is rolling out over-the-air, so it should be a while before all users get it.

SamMobile has also made the Samsung Galaxy A6+ Android Pie update available on its firmware database, and users can download it from there manually. Alternatively, you can head over to Settings > Software Update to check if the update has arrived via OTA, and then tap Download updates manually to install the latest version.

The size of the Android Pie update for the Samsung Galaxy A6+ (2018) is said to be 1282.24MB, and it reportedly brings along the March security patch. The update is also reported to bring a revamped software experience with One UI that offers a less cluttered interface, new design elements, and more easily accessible settings.

Samsung Galaxy A6+ was launched in India in May 2018 and it packs a 6-inch full-HD+ display, a Snapdragon 450 SoC, and offers 4GB RAM. For capturing images and recording videos, the Galaxy A6+ has a dual rear camera setup with a 16-megapixel primary sensor sporting an f/1.7 aperture and a 5-megapixel secondary sensor along with an f/1.9 aperture. The handset also has a 24-megapixel camera sensor on the front with an f/1.9 aperture. The rear and front camera setups come with LED flash modules. The Samsung Galaxy A6+ packs 3,500mAh battery and 64GB internal storage. After the recent price cut, the phone is available in the country with a best buy price of Rs. 18,990. 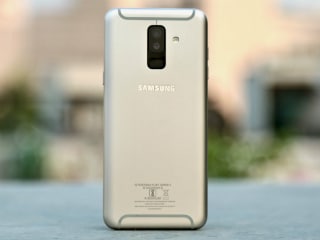