Sekiro: Shadows Die Twice for PS4, Xbox One, and Windows PC has a March 22 release date. However it turns out that certain retailers have been selling the game early. According to reports, stores in Germany have been selling the game early. Leaked copies for it appear to be both the PS4 and Xbox One versions of the game. Sekiro: Shadows Die Twice is the latest game from Bloodborne and Dark Souls creator From Software, and over the course of this generation, From’s output has garnered a vocal cult due to the sheer consistency in delivering solid gameplay. While the jury is still out on Sekiro: Shadows Die Twice, impressions from those with access to these early retail copies suggests a day one patch should be on the way.

“FPS [frames per second] are an issue PS4 Basic [standard PS4, not PS4 Pro]. Not unplayable but not really smooth either. Will probably be fixed soon,” claimed one Redditor who later followed this up with: “It’s worse than Bloodborne imo [in my opinion]. Bloodborne just had them sometimes. Right now it’s continuesly around 20fps I would guess. I’m pretty sure that there will be a fix soon.”

The wait was long enough *_* from r/Sekiro

If you were expecting an early release for Sekiro: Shadows Die Twice, think again. Officially, Activision decided against releasing the game in India. However Independent game stores like Mcube Games claim to be bringing the game at launch on PS4 and Xbox One for Rs. 3,999.

Or if you’re content with a digital copy, you can get it via the PS Store for PS4, Microsoft Store for Xbox One, or Steam for Windows PC for Rs. 3,999.

Considering that past Activision-published releases like Call of Duty: Black Ops 4 were priced significantly more at retail, it makes us wonder why it isn’t able to allow for fair pricing across both digital and physical product. If the likes of Ubisoft, Warner Bros, Rockstar, and Take Two are able to offer equal end user prices for games on disc or cartridge as well as digital download, it’s odd that Activision cannot commit to the same standards.

That said, if you’re looking to pick up the game on PC you won’t need a ridiculously high-end configuration to play Sekiro, what with the recommended specifications calling for an Nvidia Geforce GTX 970 and an Intel Core i5-2500K with 8GB RAM. The minimum system requirements are equally lenient with 4GB RAM, an Nvidia GeForce GTX 760 and an Intel Core i3-2100. Though keep in mind that none of these PC specifications include any target resolution or frame rate. What this means is, you may need a more powerful machine to run at at 4K 60fps. 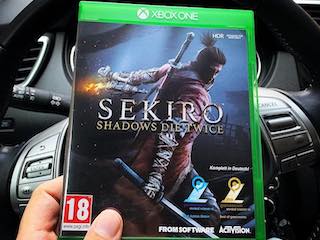