A couple of weeks ago, Overwatch developer Blizzard announced Baptiste, the game’s 30th hero. Baptiste will finally be playable on Overwatch for PS4, Xbox One, and Windows PC from Tuesday. Baptiste’s character arc, which has him abandoning Talon — the Overwatch universe’s evil faction — to help those in need, is as interesting as his abilities which toe the line between support and attack roles, what with being able to heal allies and kill foes with ease. Gadgets 360 caught up with Overwatch Lead Writer Michael Chu and Principal Designer Geoff Goodman to find out how Blizzard created Baptiste in addition to what players can expect when he’s finally released.

Codename Gadget
“Baptiste’s codename in development was Gadget,” Chu tells us. “The inspiration was we wanted to make this medic character to the capture the idea of being on the battlefield with an array of different devices to help with healing and in different situations. And I think also when you’re playing the character you get an idea of the flexibility he has all these different weapons to use at different times.”

Unlike past Overwatch heroes that are a part of Talon, such as Moira, Reaper, and Doomfist, Baptiste isn’t that high up on the org chart. He will, however, have his fair share of in-game dialogue interactions with those from Talon.

“Talon has a lot of hierarchy, he doesn’t have like a seat at the table like Doomfist or Reaper,” Chu says. “He’s an important operative but he’s not a visionary or a big leader. He’s lower down the hierarchy and has a couple interactions with different heroes. Definitely with those from Talon because he’s got a long history with them.”

In addition to this, Chu said that Baptiste would eventually interact with those “from all the different factions” too. With the Overwatch Archives Event that celebrates crucial scenarios from the game’s lore on the way, Chu confirmed that Baptiste would play a role in this year’s Archives storyline although he was tightlipped on the specifics.

From a gameplay standpoint though, Goodman stated that Baptiste wasn’t chosen to counter specific play styles or hero choices. Rather, the main objective was to woo attack-focussed players into trying out support roles in the game.

“We haven’t done this before, offering players new options new ways to play as a support class character,” Goodman says. “For example having a hitscan gun [a hitscan weapon, in game design parlance is one that, when fired, instantly hits whatever the weapon is pointing] that has high accuracy is brand new for support roles. So if you’re that kind of player who doesn’t like to play support and you just like to play Soldier 76 or Widowmaker [attack-focussed heroes in Overwatch], well now you have a support that should be real fun to play as well.”

That said, was Baptiste was geared towards Overwatch pro players or its casual audience? For Goodman, it’s more to do with your play style and preference between healing or shooting.

“A three-round burst hitscan weapon can be tricky to use if you’re not somebody who really likes to aim,” he says. “The good news is you get so much of power out of placing abilities like the immortality field at the right time and using regenerative boost and alternate fire to heal everybody up. But if you’re a player who really likes to push that aim skill, you have that primary fire which is really cool especially if you use the ultimate ability, it multiplies damage. I hope Baptiste impacts both sides — players who like the aim skill can play them and players who like to lean on the timing aspect and they can play too.”

It turns out, there’s a narrative reason for this flexibility too.

“It’s not just that he’s good at being a medic. He’s also good being a soldier and he has a certain set of skills,” Chu adds. “He’s trying to find a way to balance both of those. That’s kind of the core of its character.”

The challenges
We wondered what challenges Blizzard faced in leading upto Baptiste’s creation. In the past the team had issues with heroes that teleported or had more than two legs.

With Baptiste however, the concerns were related to readability and design of his ultimate ability, the Amplification Matrix. It’s a force field that doubles the damage of any projectiles fired by teammates that go through it. Initial concepts had it look similar to barriers in the game, which had a different purpose — stop attacks, not multiply them.

“While prototyping, I had literally used the same art we had for barriers and it was confusing because everyone on the team was trying to shoot it and was confused that it didn’t take damage [unlike barriers in the game],” Goodman reveals. “We tried to reference a lot of art elements from a design language that we’ve already used. For example, the outside of the Amplification Matrix looks like Mercy’s [another support class character in Overwatch] beams which is a damage amplification effect. It should hopefully give the impression of a damage amplification effect instead of blocking bullets. In general we try to use language like that. Colours and things to reinforce game mechanics that people already know.”

With Baptiste being the thirtieth hero in Overwatch, would Blizzard consider taking a leaf out of Dota 2 or League of Legends? Both games rotate between its many playable characters. Goodman says it’s been discussed, though the team doesn’t feel it’s got enough heroes at the moment to consider it.

“We talk about that and what’s paired with that is stuff like that hero picks and bans,” he says. “They’re both kind of related to roster size and too many heroes. We don’t have plans to do that right now. If we get a big enough roster, if we feel like that you could benefit from that or maybe the competitive season we do something like that. We feel like it’s not at a point where we have enough heroes to do that. If we do reach some point where there’s just there’s too many of them. We might do some like that. It is possible.” 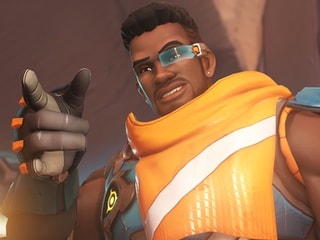 The Elder Scrolls: Blades to Launch This Week